Brazil defeat one of toughest of my career, says Argentina coach Edgardo Bauza

Argentina manager Edgardo Bauza said his side’s 3-0 defeat at the hands of rivals Brazil was one of the toughest he has ever experienced, but said his players must recover for the crucial CONMEBOL World Cup qualifier against Colombia on Tuesday.

Goals from Philippe Coutinho, Neymar and Paulinho made it five wins in a row for Brazil, thus cementing their place at the top of the South American standings and making them near certainties for the 2018 World Cup in Russia.

In contrast, Argentina, who welcomed back talismanic forward Lionel Messi from injury, have won just four of their first 11 games and currently sit outside of the automatic qualification spots.

Edgardo Bauza, who has only been in charge for five matches, is already under pressure ahead of next week’s Colombia clash.

“It was one of the toughest defeats of my career,” he said after the defeat ion Belo Horizonte. “We were doing quite well. One mistake cost us the first goal, but I think the biggest problem was the second.

“But we have to be positive, in three days we have a very important match.”

Messi, meanwhile, who had little impact on the match, accepts his side are likely to come under heavy criticism for what was a comprehensive defeat.

“We knew that this match was going to be difficult,” he said. “The first goal stunned us, the second goal killed us.

“Unfortunately, before that first goal we were organsed. The second affected us. After that, we became disorganised.

“We have to become strong mentally. We have to get out of this tough situation. We’re going to get criticised. The people [in Argentina] do not have patience.” 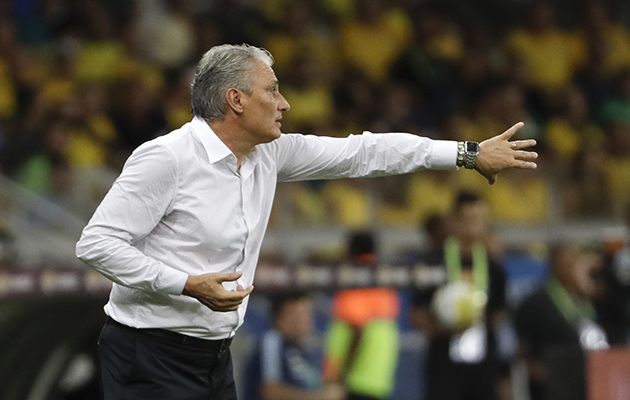 “We dedicate this win to Carlos Alberto,” Tite told reporters. “The start was better than I expected. I finished my pregame speech with an image of Carlos Alberto’s goal to show team spirit.

“We knew how to overcome suffering and improve in the match when Argentina played better. The team is growing every day.

“Argentina were better at times, they caused some problems and on top of that Fernandinho was already booked.

“We had to reduce the amount of chances that Messi had to get the ball away from the area.”

It’s a yes to Independiente but no to Real Madrid, says Sergio Aguero

Yet another head of CONCACAF faces life ban from football