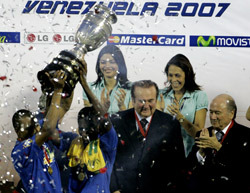 Brazil coach Dunga said his team had regained their self-esteem by winning the Copa America.

Dunga took charge of Brazil in the wake of their disappointing performances at the World Cup last year, when they lost to France in the quarter-finals.

After only 11 months in charge, he won his first title on Sunday when his team beat arch-rivals and favourites Argentina 3-0 in the Copa America final.

Five minutes before half-time, Roberto Ayala inadvertently deflected Daniel Alves’ cross into his own net. And Alves secured the trophy with 21 minutes when he collected a pass from Vagner Love and slotted the ball beyond Abbondanzieri into the far corner.

“We came here to rescue the self-esteem of the Brazilian supporter, the worker leaves home early in the morning and comes back at late night and whose only satisfaction is when Brazil wins,” said Dunga.

He then paid tribute to his players, who he said had overcome adversity on the road to success.

“They are winners, they come from families who financially are not so well off, nobody has given them anything, they’ve worked hard for this and so they deserve it,” he said.

He also warned that Ronaldinho and Kaka, who asked to be rested from the tournament, would not walk straight back into the team.

“If a player comes and he does well, how can I take him out of the team?”

Despite coming under fire in the earlier stages of the tournament, Dunga said he had answered his critics.

“If my team wins, then I have nothing to explain,” he said.

His tone was echoed by Robinho who was the tournament’s leading scorer with six goals and was instrumental in Brazil’s success.

The players of Argentina, who were looking to lead their country to their first trophy since 1993, were distraught with the outcome.

“Losing like this makes you angry, but there’s nothing more we can do but wait for another final,” Argentina forward Lionel Messi said.

“We knew we had to be awake today, but instead we were caught falling asleep,” Argentina forward Carlos Tevez said.

“It makes you angry being unable to win and close out an exceptional tournament.”