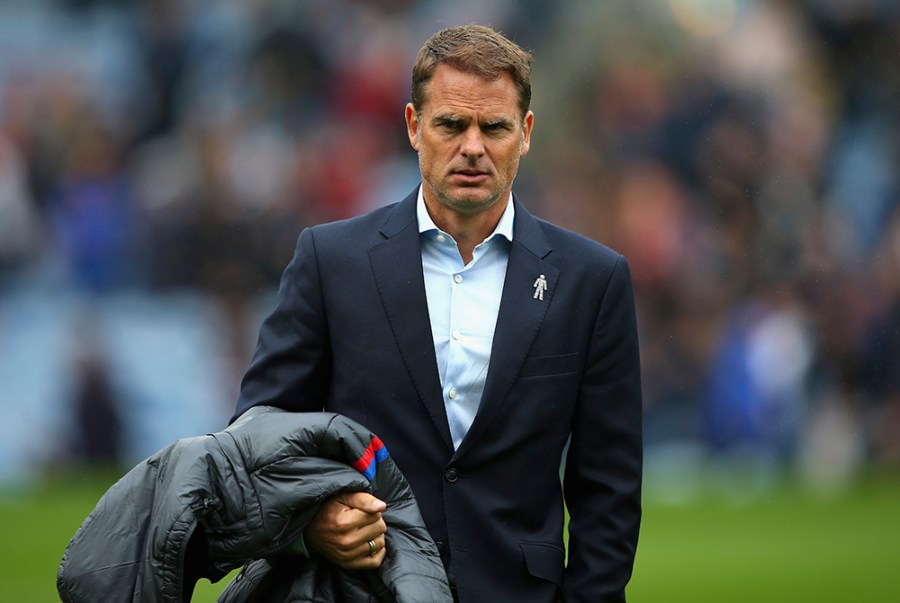 Sympathy is surely due to the sacked Crystal Palace manager Frank De Boer, brusquely dismissed by that erratic club chairman Steve Parish after what was far and away Palace’s best display of the season at Burnley, even though they lost.

Sean Dyche, the generous home manager, admitted afterwards that Palace had been the better team and deserved to win.

De Boer had in fact modified the more elaborate tactics for which Parish had brought him to the club, saying the Dutchman’s arrival with his creative tactics was “fantastically exciting for this football club, an amazing milestone for us”. It hasn’t taken him long to change his tune.

At Burnley, Palace gave away a ludicrous goal with an absurd attempted back pass to their keeper and though centre-back Dann missed a golden late chance to equalise. Whereupon, out goes De Boer and in comes Roy Hodgson, born and brought up so close to Palace. A sad failure when his England team humiliatingly lost to Iceland, though I do still believe he should have been given the England job immediately after the 1994 World Cup in America, whose finals he had reached so splendidly with a Swiss team which had twice confounded Italy on the way there.

Over the seasons, Parish has had far too much to say and far too many volte face. Roy has now been promised a huge bonus if he can save Palace from ultimate relegation. I hope he can succeed. Meanwhile, the Thoughts of Chairman Parish remain ever contradictory. It might be wiser and better for the club were he to keep them to himself.

Neil Warnock is a deeply experienced and highly competent manager but after his Cardiff team’s 1-1 draw at Craven Cottage against Fulham, a match which I reported, he was surely speaking fluent drivel.

Cardiff arrived top of the so-called Championship with a 100 per cent record. They met a Fulham team lacking three key players including the influential left-footed skipper and main midfielder, Tom Cairney. It looked a good thing for Cardiff but in the event Jack was as good, sometimes, even better, than his master.

Fulham hit an upright, took a second-half lead and were pegged back late in the game by Cardiff’s headed goal. At his post game Press Conference, what did Warnock bewilderingly say? “If any questions needed answering, today answered them. Going behind could have killed a lesser team. If you’d offered me a point before, I’d have snapped your hand off.” Really?

“If you don’t put them in,” as Matt Busby once told me, “you can’t know what you’ve got.” Great credit to the Wales manager Chris Coleman who cared to launch the 17-year-old Liverpool reserve Ben Woodburn on the left flank against Austria, playing him again against Moldova.

How richly he was rewarded! The remarkable youngster, surely the embodiment of the so-called Big Match Temperament, set up a splendid day for Wales with a rocketing shot, then in the next game beat his full-back in classical wingers’ style – where have they all gone? – to set up another goal.

But what happens to him now, at Liverpool, who like all too many of the biggest clubs spend so much money on established players? It is absurd to think that he may simply become at best one more man on the bench, no more than an occasional substitute. Surely he must go out as soon as possible on loan where he can regularly play.

And is there a lesson here for England whose junior teams have recently surpassed themselves in major tournaments, not least winning a World Cup in South Korea? Far too many of them will now be languishing in their clubs’ reserves or at best on the bench, while foreign imports keep them out.

Perhaps Liverpool will now have a good think about Woodburn after their 5-0 thrashing by Manchester City.

A surprising and somewhat gratuitous attack by Thierry Henry, an undoubted star, even if that handball against Ireland in a World Cup qualifier lodge in the memory, on Alex Oxlade-Chamberlain. Whose transfer from Henry’s old club Arsenal prompted a somewhat gushing endorsement of his new club and manager, Jurgen Klopp.

“I have been watching him for a very long time,” said Henry, “but I still don’t know what he’s good at.”

I would have thought it was pretty plain by now, even if Oxlade-Chamberlain will never be an Henry.