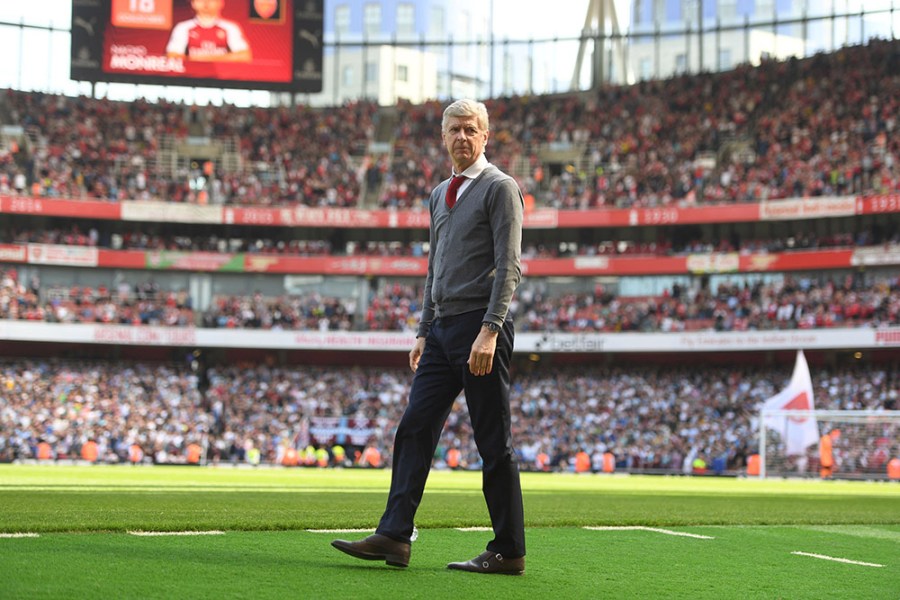 Brian Glanville: Wenger’s survival for 22 years at Arsenal is an extraordinary achievement

Much has been written and much missed after the sad but belated defenestration of Arsene Wenger at Arsenal. One Sunday newspaper – no names, no pack drill – has been particularly guilty with a series of brief biographies which omitted much more than they recorded.

Let us meanwhile go back 22 years in time when Wenger was so unexpectedly hired by Arsenal. The surprise to those of us who have long and closely followed football in Europe was the manifestation of sheer ignorance. A self-serving bigoted little group of pompous Arsenal fans demanded, “Arsene who?” when the most cursory knowledge of European football would have showed them Wenger had done great things at Monaco before debatably losing his job and flying off to coach in Japan.

Scant credit has been given in these Wenger dominated days to the man who brought him to Highbury: David Dein. A successful businessman of unexceptional origins, who had once sold tinned goods in Shepherds Bush market. Dein had not only the perspicacity to see a future titan in Wenger but the sheer tenacity to bring his appointment about.

Dein’s own connection with Arsenal and its then lofty board was hardly a close one. He was patently an outsider, and when he bought a packet of shares in the club the then chairman Hill-Wood deemed them potentially worthless. They would prove to be anything but. In the event, Dein would acquire power in the club and when dramatically forced out – he hadn’t wanted to move from Highbury to what became the Emirates – he would make millions by selling his shares.

I have always thought that when Dein departed, Wenger lost not only a friend and an admirer – with the luminous foresight hat brought him to Highbury – but a wise counsellor. With Dein gone, Wenger had no moderating influence and was free arguably to make the mistakes that he did.

From the finest moments of his arrival, Wenger brought gloriously refreshing new methods to the club, not only to the training – in which some players felt he paid far more attention to attack than defence – but to his credit he paid meticulous attention to diet and the general well-being of his players.

Tony Adams, the highly promising centre-half whom Wenger also inherited and who had initially been sceptical, was quickly convinced. Yet in passing it must be said that over the years Wenger was strangely blind of Adams’ problems, namely his excessive drinking, a process which had begun before Wenger ever arrived. Goodness knows there was plenty of sporadic evidence of drinking across the years, not least when Adams in a London club plunged down a set of stairs and badly cut his head. He played that Saturday just the same.

Ultimately, he would be prosecuted and convicted of drink driving, though the woman policeman who arrested him found him still under the influence of the night before but sitting in a stationary car and doing no harm to anyone.

Nevertheless it was another warning sign for Wenger. In due course shortly after retiring from the game Adams would would seriously lose control. A red top paper published a frenetic account of how Adams and a bunch of fellow drinkers went on a grotesque journey on FA Cup Final day. Subsequently of course he would conquer his demons and even establish a clinic for advising and redeeming alcoholic players. Wenger was more successful in the case of Paul Merson, a quick and gifted winger who was involved in a dire succession of motor accidents.

The acquisition of the powerful midfielder Patrick Vieira, unappreciated at Milan, proved a notable coup. Thierry Henry, destined to break so many records of scoring at Arsenal, came from Juventus where he had been strangely unappreciated for £10million. Wenger had coached him at Monaco but now with colossal success turned him from an outside right into a centre forward which was where he wanted to be. When Vieira left, Wenger’s particular triumph, and I remember him talking about the idea after a pre-season friendly at Barnet, was to promote the far smaller, slighter Cesc Fabregas to the role and how wonderfully it worked.

Wenger could be a man of moods. I remember how upset he was when Jose Mourinho at his most crass called him a voyeur and probably didn’t even know what the French word meant. At a Press Conference at Highbury following a match, he turned his guns ferociously at the hapless journalists who had simply asked him about it, threatening them with dire consequences. But seldom did the urbane mask slip.

I still think he should have gone four years ago when results were becoming embarrassing but at that time he was monarch of all he surveyed, whatever the consequences. But to survive for 22 years in these impatient and contentious times is still an extraordinary achievement in itself, despite the disappointments of these recent years.