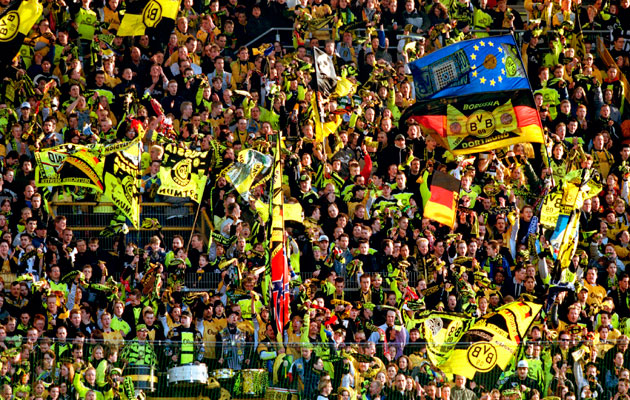 The chief executive of the Bundesliga, Christian Seifert, says there would be massive backlash if German clubs were to start charging as much for tickets as Premier League sides.

Seifert was speaking the day before hundreds of English football fans prepare to march on Premier League and Football League headquarters in protest against the cost of watching football in England.

The march will focus on overall prices amid fury from West Ham United supporters about having to pay up to £75 to watch their side’s season-opener against Tottenham Hotspur – the highest price for any match in the opening weeks of the new season.

The Bundesliga preferred to keep prices down to retain the atmosphere and sense of community within grounds.

The average Bundesliga ticket price is 23 euros and its average attendance of 43,500 is the highest of any football league in the world, almost 9,000 more than the Premier League’s.

Admittedly, many grounds in Germany have greater capacities than their English equivalents and when it comes to take up of seats, the Premier League enjoys a slightly higher occupancy rate (95% to 92% for the Bundesliga). Indeed, the average attendance, 36,695, was the highest in English top-flight football since 1949-50.

It is a situation which enables many English clubs to enjoy a significant financial advantage over their German counterparts.

“Bayern Munich gets each year 30 to 40 million euros less than Manchester United from ticket sales, which means €300m in 10 years,” said Seifert. “We [the Bundesliga] don’t have influence on ticket prices. All the clubs can decide on their own but some kind of common sense prevails.

“Every year in magazines you see double pages about the prices of tickets, bratwurst and beer, etc and everyone gets in a huge shitstorm if the price of bratwurst goes up by 10 cents. The concept of Aldi was invented in Germany: very cheap but a lot.”

In addition to keeping the prices down, German clubs choose to limit the number of season tickets available in order to broaden and diversify their audience.

“Demand is huge but clubs choose to limit season ticket sales to 40 or 50% because they don’t want the same people going every week,” he added.

“They want everyone to have a chance. It would be very easy to raise the prices and make more money out of the fans but the clubs tend to choose not to do so. From a pure economic perspective you can say ‘What a mistake’ but, given our holistic approach, I would say it is the right approach.”

Seifert says that this holistic approach is based on bringing together “finances, the game and society: if we do not have success in all three dimensions, we do not consider it success at all.”

He hailed the “basic treaty” that has existed between German clubs and the Bundesliga since 2002 enshrining the belief that “clubs are an established part of society, bring people together and cities and regions identify with them”.

It’s all a far fry from the Premier League, often described by Brian Glanville, as the Greed is Good League.