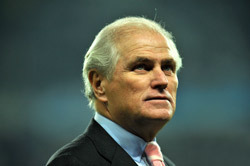 Former Real Madrid president Ramon Calderon and members of his team have been charged with interfering with the postal vote in the club’s 2006 election, a Madrid court has confirmed.

“There are serious indications that a considerable number of postal votes were falsified, not for the benefit of one candidate, but to prejudice it and to put a question mark over this form of voting,” the judge said in the ruling.

“There are signs that numerous people were involved in one form or another in the various plots for the collection and falsification of the postal votes.”

Calderon was elected president after a controversial campaign in 2006, when the postal vote was not included in the count.

Calderon and another candidate, Arturo Baldasano, managed to obtain a court ruling suspending the postal vote two days before the election.

After almost eight months of controversy the postal vote was finally rulled invalid.

“I have nothing to hide because I haven’t touched a vote in my life,” Calderon’s former vice-president Juan Mendoza told Marca. Mendoza is one of the accused.

Calderon was forced to resign in January to be replaced by interim president Vicente Boluda, after the irregularities came to light in Marca.

Boluda, a board member at the time, has also been charged over the Dec. 7 assembly.