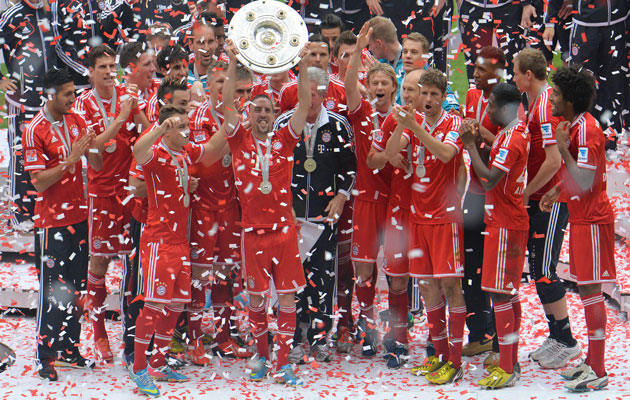 All eyes will be on the first match of the Bundesliga restart which, by pure chance, pits runaway leaders Bayern Munich against Wolfsburg, the only team realistically with a chance of preventing the champions from retaining their title.

Bayern, who have won the league at a canter for the last two seasons, are unbeaten this term and all the talk in Germany is not ‘will they win it’ but when. Last season, they wrapped up the title with seven matches of the campaign remaining and they remain on course to emulate and even better that record this time around.

No team in Germany’s top flight has gone through a league season unbeaten – Bayern in 1986-87 and 2012-13 came closest with a solitary defeat – but with 14 wins and 3 draws in the first half of the campaign, Pep Guardiola’s side are still on course to become the Bundesliga’s first Invincibles.

First up though are second-placed Wolfsburg who, after a difficult start to the season, went on a tear in the run-up to the winter break and who stand six points clear of third-placed Bayer Leverkusen.

Wolfsburg’s Swiss international Ricardo Rodriguez has certainly not given up hope of winning the Bundesliga title.

“Anything is possible in football,” he told Kicker magazine. “Of course Bayern are just great, but Bayern can also make mistakes.”

Even a win on Friday night would only reduce the arrears to eight points, but Rodriguez is not conceding the title just yet.

“They would still be ahead of us, but we would just have to keep going at them,” said the left-back. “We’ve got a really good team. Anything can happen in Wolfsburg.”

For Bayern, the biggest concern for the second half the season is complacency. Former goalkeeper Oliver Kahn, who lifted the Bundesliga a record eight times with Bayern, senses an opportunity for Wolfsburg if their opponents are not fully motivated.

“You can beat them when Bayern, for any reason, lose their motivation,” Kahn said. “And I can imagine that happening.

“Bayern are a highly sensitive structure, and just one or two oversights can be enough for them to miss out on their biggest goals.”

Kahn also spoke about the managerial attributes the Spaniard has brought to Bayern.

“Guardiola has definitely not reinvented football,” Kahn was quoted as saying by Kicker.

“But he clearly has two major qualities. For starters, he can analyse a game incredibly well. Plus he is capable of making changes during a game that can be decisive.

“However, coaches should also praise their players every now and then. You cannot be critical of your players all the time after a successful game. At some stage, the players will not take it seriously any more.”

Kahn then proceeded to discuss Guardiola’s future at Bayern and admitted he would not be surporised to see the coach walk away when his contract expires in 2016.

“You never know with Guardiola whether he will renew,” he said. “A workaholic like him will never commit himself for too long a period. His working method costs so much energy.”