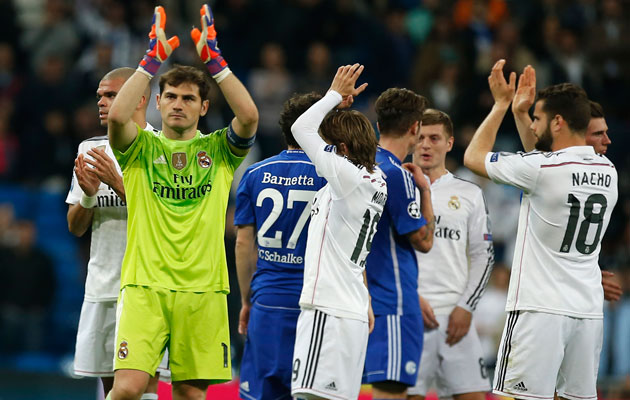 Carlo Ancelotti has apologised to supporters after his Real Madrd suffered an embarrassing 4-3 Champions League home defeat to Schalke.

The defending champions were booed off at the Bernabeu after losing the second leg 4-3 – despite reaching the quarter-finals with a 5-4 agregate win.

“I’m very sorry. We played very badly and that is bad for our image,” said Ancelotti.

The 10-time European champions suffered a fifth defeat of 2015 and it could have been worse but for two late saves from the otherwise unimpressive Iker Casillas.

Ancelotti has faced growing criticism from sections of the club’s support this season, despite leading Real to the Club World Cup in December and presiding over a club record of 22 successive wins.

“All the criticism we get is justified,” Ancelotti said. “We need to look at our defence, that’s where all our errors were. No team has put four past us at home.

“We had problems in every aspect of the game: offensive; defensive; desire; fight and concentration.

“It’s not easy to explain what’s happened. We’ve lost confidence. It is quite incomprehensible after what we did until December,” said Ancelotti, whose players were booed at the final whistle.

Captain Casillas, who had to persuade players to acknowledge the fans at the final whistle, was at a loss to explain the dip in form.

“It is clear we have hit rock bottom in a spectacular way,” he said.

“But the positive thing is that, a week on Friday, we will be in the draw and we can forget the past 10 days.

“The team has again failed to reach the level of recent months but what’s important is that we realise that.

“We have to understand the Madrid fans and today we weren’t up to the standards of Real Madrid and the Champions League last 16.

“We were made to sweat too much but what we have to do is be more united than ever.”

Schalke took the lead on the night on two occasions through first-half goals from Christian Fuchs and former Real striker Klaas-Jan Huntelaar.

Cristiano Ronaldo twice pulled Ancelotti’s side level with headers before half-time, and Karim Benzema put the hosts in front early in the second half.

But further strikes from Leroy Sane and Huntelaar secured a deserved win for the visitors.

“The team showed a really high level. We tried everything to stay in the competition. Tonight we won the match, but nevertheless it wasn’t enough.”