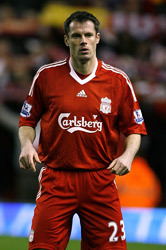 Jamie Carragher has explained that it was Liverpool’s failure to qualify for the Champions League that persuaded him to come out of international retirement.

Liverpool defender Carragher has been named in Fabio Capello’s provisional 30-man squad for the World Cup three years after retiring from international duty.

“The FA got in touch a few weeks ago and asked if I would have a rethink, due to injury problems. I said I would make myself available,” said Carragher.

“The World Cup and Champions League are the highest levels of football.

“I’m not getting any younger, we have no Champions League football next season and I am keen to work under Fabio Capello.”