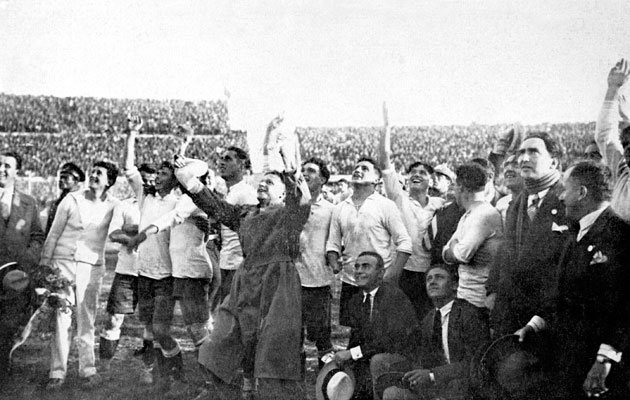 A Centenary Copa America has been added to the international schedule for the summer of 2016. This would be staged, however, in the United States and not in the home of oldest surviving international tournament, South America.

This may seem a little unfortunate on South American fans: the opportunity to celebrate a significant step in football history will not be theirs to see, except on television. But then, there is more to this self-contradictory venture than meets the eye.

The tournament was announced last week in a joint media briefing in Miami by both regional confederations, CONMEBOL and CONCACAF. Justifying the joint venture, CONMEBOL president Eugenio Figueredo said: “This is a Copa Centenario we want to play as an extra tournament and it’s going to be a resounding success that will make us think about not waiting another 100 years for a more permanent competition between CONCACAF and South America.

“This is a first, without forgetting that CONCACAF teams have already played as guests in the Copa America.” CONMEBOL began inviting teams from its northern neighbours to the Copa America in the early 1990s, notably Mexico, Costa Rica and the United States.

The central/North American confederation has already registered an inquiry with world federation FIFA as to whether the tournament can be incorporated formally into the international calendar. The significance here is that clubs would have an obligation to release their players.

(Luis Suarez could thus be playing through his European summer holiday for a seventh successive year after the 2010 World Cup, 2011 Copa America, 2012 Olympics, 2013 Confederations Cup, 2014 World Cup and 2015 Copa America; this would hardly tally with FIFA’s regular hand-wringing over pressure on players.)

But CONMEBOL’s wish to cosy up to CONCACAF can be seen as early gambit in a much longer game of political chess.

Uruguay and Argentina have already registered a will to co-host a centenary World Cup in 1930, one hundred years after Uruguay hosted the inaugural tournament and defeated their southern neighbours from across the River Plate in the final.

Those first finals featured 13 nations and were staged, comfortably, in a mere three stadia in Montevideo. Clearly this is no longer an option with the quality-collapse expansion of the finals to 32 teams. Hence the involvement of Argentina: presumably the Opening Match would be in Buenos Aires with the Final, as in 1930, in the historic Centenario in Montevideo.

A major snag will be persuading the world game to go back to South America after all the chaos and bad temper which has been, and will be, sparked by going to Brazil this year.

Uruguay is not the problem; this is Argentina – and not the only problem.

The prospective co-hosts’ dream has been threatened by the fall-out from the disastrous decision to run the 2018 and 2022 bidding campaigns simultaneously. One of the reforming outcomes was that the hosting decision has been removed from the executive committee and handed back to congress.

In or around 2020 the executive will be charged with recommending three competing candidates and then it is down to a political battle royal behind the congress scenes. Winning demands votes . . . and CONMEBOL, with only 10 memebers to call its own, would be on a loser.

Hence the need to build liaisons and where better to start than with northern neighbour CONCACAF which has 41 votes in Congress (including Guyana, Surinam and French Guinea in South America and seven more in what counts as Latin [central] America) anyway?

Along the way Mexico has expressed an interest in hosting the 2026 finals so there could be no doubt about how CONMEBOL would vote if that particular push came to shove.

UEFA’s view on missing out three times in a row – 2022, 2026 and 2030 – would present a further complication. But the Uruguay federation has informal government support and has already embarked on a campaign to raise the nation’s sporting visibility.

Next year, for example and by happy coincidence, Montevideo will host the annual congress of AIPS, the international sports journalists’ association with delegates from more than 100 countries.

Prepare for more fun and games in the corridors of power.