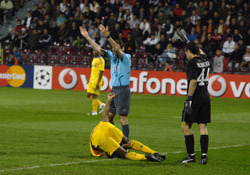 Luiz Felipe Scolari is waiting for news on the extent of Didier Drogba’s injury after the Chelsea striker was carried off in the 0-0 draw at CFR Cluj.

Drogba, who has just returned from knee injury, left the stadium on crutches and is set to have a scan on Thursday.

But he said Ashley Cole will be fit for the weekend after missing the game against Cluj with a back problem.

Chelsea, who are already missing injury victims Joe Cole, Deco, Michael Essien and Ricardo Carvalho, are in the midst of an injury crisis ahead of Sunday’s Premier League encounter against Aston Villa.

“I don’t know now what the possibilities I have for Sunday are, maybe after Thursday I have a chance to say something more,” said Scolari.

“I didn’t see the challenge on Drogba. Injuries come in training and on the pitch. This is normal for players. I’ve asked the doctor what is happening but I’m not sure of anything yet, it’s too early to say how bad he is.”

Brazilian coach Scolari was not too disappointed with the result against the Romanian outfit.

“We didn’t play well, but one point is better than zero points,” he added.

“They beat Roma, they are confident, they’re playing at home and they wanted to show to the people they are very good.

“Cluj were confident, they wanted to prove something. Maybe they will have a problem in their next game because they ran for 95 minutes.”

“We knew this and we prepared but we missed one or two times in front of goal.