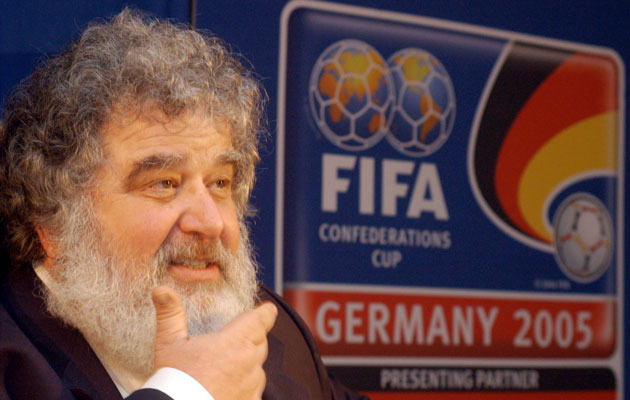 Just when Sepp Blatter must have felt safe in putting his head above the parapet – after a triumphant World Cup and an early-round presidential knockout of Michel Platini – so FIFA has been assailed with one of the most bizarre revelations of even its own scandal-scarred recent years.

An investigation by New York’s Daily News claims that Chuck Blazer, once one of the most powerful men in the world federation, was wired by the FBI for a series of meetings with leading football figures at the London Olympic Games in 2012.

Blazer, according to the newspaper, undertook an entrapment enterprise in exchange for US federal authorities not pressing charges for tax evasion over massive earnings during his two decades as general secretary of the central and north American confederation.

In that era Blazer worked in tandem with Trinidadian history teacher Austin ‘Jack’ Warner to turn CONCACAF from a quiet football backwater into a political power in the world game . . . generating vast sums from which Warner and Blazer both benefited.

Their empire came crashing down in the spring of 2011 after Warner set up a Caribbean Football Union conference for FIFA presidential bidder Mohamed Bin Hammam. Delegates were handed envelopes containing $40,000 in cash for ‘expenses’.

When news of the cash leaked out Blazer – back in New York – felt he had no option but to blow the FIFA whistle on both Warner and Bin Hammam. Initially Blazer appeared to have saved his own skin. In fact, he had also opened his own door to not only football but judicial and fraud investigators.

This is where the Daily News picked up the story, claiming:

“[Blazer’s] surreptitious assistance over the last three years coincided with a series of internally commissioned corruption investigations that stretch from the Caribbean to Zurich, from Australia to Moscow to Qatar, the small Arab nation playing host to the 2022 World Cup. Closer to home, [federal agents] are collaborating on the case pursued by Brooklyn federal prosecutors.”

“The investigation, according to sources, is believed to include a grand jury and has generated requests sent to subjects in foreign jurisdictions including Zurich, home to FIFA’s opulent, heavily secured headquarters, where Swiss banking secrecy laws have long protected massive business deals from public scrutiny.”

Blazer was a member of the FIFA exco from 1996 until his suspension and resignation in 2013. He was also chairman of the TV and marketing committee and one of the few men to justify the decision to run bidding for the 2018 and 2022 World Cups simultaneously.

Almost all FIFA’s senior figures attended the London Olympics in the summer of 2012.

Blazer, ahead of his arrival at the May Fair Hotel between Berkeley Square and Piccadilly, sought to organise personal meetings with senior officials from his contacts file which is also, now, in possession of the FBI.

Officials approached reportedly included Alexey Sorokin (ceo of the Russian 2018 World Cup and by then head of its organising committee), Frank Lowy (head of the Australian federation and its failed 2022 bid), Anton Baranov (assistant to Vitaly Mutko, Russian Sports Minister and FIFA exco member) and the President of the international charity fund “For the Future of Fencing” Vitaly Logvin.

The Daily News claims that Blazer also sought to invite along Peter Hargitay, a long-time adviser to Blatter and consultant to the Australian World Cup bid, and former US Soccer president Alan Rothenberg. Rothenberg is known to have excused himself.

At all his meetings Blazer placed an apparently innocuous keyfob – but one wired for sound – on a nearby table so investigators could listen in to his apparently confidential discussions with and about the people and politics inhabiting world football and the World Cup.

Speculation will be sparked that revelations from those discussions may be referred to in judicial and investigatory authorities in other countries.

A FIFA spokeswoman said the world federation had never received “any request from American law enforcement” concerning this Blazer isue and had no comment to make on the Daily News story.

Blazer, now 69 and one of the prime movers in the modern development of soccer in the United States, is known to have been seriously ill with colon cancer for some time.