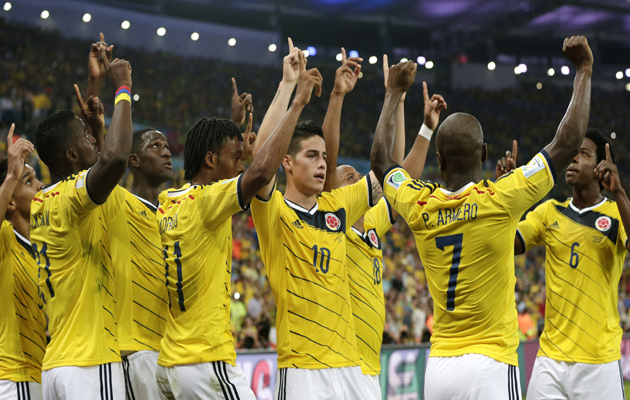 Match overview: Colombia, inspired by James Rodriguez, reached the World Cup quarter-finals for the first time following a 2-0 victory over Uruguay at the Maracana stadium. Uruguay, without banned striker Luis Suarez, were content to let Colombia make the early running and were punished when Rodriguez unleashed an unstoppable volley for Colombia’s opening goal. Rodriguez was on hand to finish Colombia’s second, a well-worked team move, early in the second half. Uruguay switched from a back five to a four-man defence as they chased the game and forced Colombia keeper David Ospina into a number of good saves late in the match.

But it was night for Colombians to celebrate – and for the world to welcome the arrival of an exceptional talent in James Rodriguez.

Key moment: James Rodriguez’s extraordinary goal on 28 minutes, a remarkable chest, turn and volley that crashed in off the underside of the bar. Until then, neither side had threatened but Rodriguez’s strike knocked the stuffing out of Uruguay.

Man of the match: James Rodriguez. Another brilliant performance from the young playmaker, capped by an astonishing strike for Colombia’s first goal and a neat finish for the second.

Matter of fact: James Rodriguez scored his fourth and fifth goals in four matches at this World Cup.

Talking point: Many predicted that Colombia would struggle without Radamel Falcao, their key goalscorer from the qualifying campaign. But against Uruguay they scored a wonderful individual goal from James Rodriguez, who also finished an exceptional team effort for his team’s second. No Falcao, no problem.