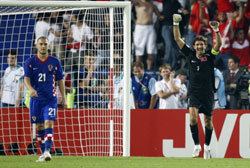 Turkey staged another late, late show when they scored with the last kick of the game to draw 1-1 with Croatia, before going on to win a penalty shootout to earn a place in the last four of Euro 2008.

It was an astonishing finale to what had been an otherwise mundane encounter. The teams played out 120 minutes of largely sterile football before Croatia went ahead with a minute of extra-time remaining, only for Turkey to hit back moments later.

The game was eventually settled by penalties and with Luka Modric and Ivan Rakitic missing the target, it was left to veteran keeper Rustu Recber to pull off a save from Mladen Petric to seal Turkey’s progress to next Wednesday’s semi-final against Germany.

In a cagey opening that offered no hints at the drama to come, it was Turkey who initially looked the more composed side, with Hamit Altintop providing the first scare when he shot wide after good work on the left by Tuncay Sanli.

At the other end Darijo Srna was denied by a brilliant challenge by Hakan Balta after a misunderstanding between keeper Recber and his full-back Sabri Sarioglu.

After a bright start by the Turks, Croatia gradually began to assert themselves, with Modric a growing influence, while the pacey Prancic began to enjoy some freedom down the left flank against the makeshift full-back Sabri.

The best chance of the half fell to Ivica Olic after good work from Luka Modric. The Tottenham-bound midfielder collected a pass from Dario Srna and advanced into the box before delivering an inch perfect cross for Olic who hit the bar from just five yards out. The ball rebounded off the woodwork to Nico Krancjar but he was unable to control his header and the ball sailed over. Modric beat the turf in frustration at the double miss.

Thereafter, Croatia looked in control, although they were almost stunned by a thunderous shot from Mehmet Topal that sailed just wide of the post.

Turkey, depleted by injuries and suspensions, struggled to mount any effective attacks after the break and there was a sense that this was as far as Fatih Terims’s side could go. But, while their defence remained resolute and Croatia struggling to create any clearcut openings, it was impossible to write them off.

Rakitic came close after the interval, working a one-two with Olic but lofting the return ball over the bar. Olic was then set up by Modric but was unable to get any purchase on his shot and poked the ball tamely at Rustu. The Turkish keeper pulled off one acrobatic save late on when he tipped Srna’s goal-bound free-kick past the post.

It was all Croatia as the half wore on, but their inability to penetrate in the final third meant that the game went to extra-time.

Somewhat surprisingly, it was Turkey who looked the brighter side in the first period of extra-time. Tuncay danced through two challenges before firing in a left-foot shot from a narrow angle that Pletikosa parried away for a corner. The Middlesbrough player, who ran tirelessly throughout, went close shortly afterwards when his shot fizzed past the post.

However, as the final whistle loomed, penalties seemed an inevitability. That was until the dramatic final 90 seconds which contained more excitement than the preceding two hours. First, Croatia broke down the right flank and as the ball appeared to be running out for a corner, Modric nipped in ahead of Rustu and chipped for substitute Igor Klasnic to head in at the near post.

The goal prompted wild celebrations among the Croatian players and coaching team, with a delirious Slaven Bilic racing down the touchline to embrace his players.

The joy was to prove shortlived as the tenacious Turks launched one last attack through a long punt by Rustu. The ball fell kindly for substitute Semih who fired home a poweful right-foot shot into the roof of the net.

As the final whistle sounded, the momentum was with the Turks as the despondent Croats looked like they were struggling to come to terms with victory being snatched away from them at such a late hour.

Sure enough, Modric missed Croatia’s first penalty, and although Srna scored their next effort, a further miss from Rakitic was followed by Rustu saving Petric’s spot-kick.

Turkey are through to the semi-finals where they will face a Germany side who can scarcely believe their luck. Not only have they avoided their bogey team, but they face a Turkey side shorn of several key players through suspension. In addition to keeper Demirel Volkan who is serving a two-game ban, Terim has also lost the services of Emre Asik, Tuncay and Arda Turan – all of whom picked up bookings tonight. With influential striker Nihat limping off just before the end, the Turkish coach will have his work cut out naming a starting XI for next week’s semi-final.

But, that is for another night. For now, Turkey can enjoy their moment. One remarkable statistic has emerged from their efforts thus far: over the course of four matches they have only actually held the lead for a total of two minutes. And yet, in what is turning out to be an incredible tournament, they now find themselves just 90 minutes away from a place in the the final.