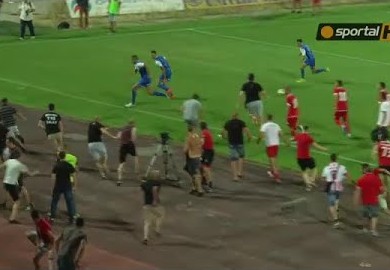 Players from the Israeli side Ashdod were chased off the pitch by supporters of CSKA Sofia during a friendly match in the Bulgarian cpapital on Sunday night.

The players were forced to flee after the referee brandished a red card following a violent lunge on one of the CSKA players. Angry supporters spilled on to the pitch pitch before bombarding the players with bottles and chasing the terrified players into the relative safety of the stands.

Calm was eventually restored, but not before the players were chased from one of the Balgarska Armia Stadium to the other.

CSKA were relegated to the country’s third division after their most recent campaign as a result of ongoing financial difficulties.