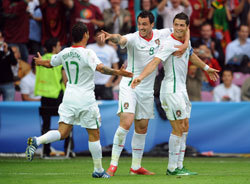 Portugal are virtually assured of a place in the last eight after they overcame the Czech Republic 3-1 in Geneva.

Goals from Deco, Cristiano Ronaldo and the substitute Ricardo Quaresma were enough to ensure maximum points from their opening two games for Luiz Felipe Scolari’s side. Libor Sionko replied for the Czech Republic but they will now require something from their final game against Turkey if they are to reach the knockout stages.

It took Portugal just eight minutes to make the breakthrough, when Deco and Ronaldo, the two most effective Portuguese players on the day, combined to deadly effect. Deco cut infield and found Ronaldo, whose one-two with Nuno Gomes was intercepted by Czech keeper Petr Cech, but Deco who had continued his run, was able to squeeze the ball over the line.

The goal seemed to rouse the Czech Republic and within ten minutes they were level. A Jaroslav Plasil corner from the right was met with an emphatic header by Libor Sionko and the ball sailed beyond Ricardo.

Portugal continued to set the pace and Ronaldo was denied on a number of occasions by Cech. However, Karel Bruckner’s side, who worked hard to deny space to Ronaldo, will have been pleased to have restricted the Manchester United forward to long distance efforts.

It was not all one-way traffic and Milan Baros, leading scorer at Euro 2004, embarked upon a powerful run from the halfway line deep into Portuguese territory, but his final cross was weak and the ball was scrambled to safety.

The pattern of the first half continued after the break; Portugal were playing the better football, but decent openings were proving hard to come by, and while the score remained level, the Czech side remained danergous – especially from set-pieces. Indeed, one such effort almost saw Bruckner’s side take the lead on 62 minutes when Ujfalusi flicked on a Plasil corner, but the ball evaded the onrushing Baros at the far post.

A minute later, Portugal regained the lead when Deco picked out Ronaldo with a precise pass on the edge of the area and the winger steered a crisply-hit shot past Cech.

The Czech Republic refused to capitulate and Bruckner, sensing a vulnerability at the heart of the Portuguese defence, introduced Jan Koller to further unsettle Ricardo Carvalho and Pepe. The switch almost paid dividends when both central defenders, distracted by the giant striker, left Sionk unmarked on the six-yard box, but he was unable to gain any power with his header and Ricardo tipped the effort over the bar.

With time running out and the Czech Republic pouring men forward in search of an equaliser, Portugal delivered the killer blow. Quick thinking by Deco saw the Barcelona playmaker hoist a free-kick from hisown half over the Portuguese defence, to the lurking Ronaldo, who advanced on goal before passing to Quaresma for an easy tap in.