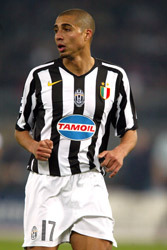 “David is disappointed, not so much because he wasn’t called up but rather for the reason the coach decided to leave him out,” Deschamps told La Gazzetta dello Sport on Monday.

“When he (Domenech) says he hasn’t called him up because he is playing in Serie B and he doesn’t consider this a sufficient level to play in the national team, it is offensive both to the player and the club.”

Juventus were demoted to Italy’s second-division Serie B as punishment for their part in last year’s match-fixing scandal.

The striker has scored nine goals in 19 matches to help lift Juve to the top of the division, despite a nine-point penalty.

“As well as that, he is the only coach that doesn’t call coaches to make sure of the physical condition of national team players. I’ve never heard from him, and neither have the others.”