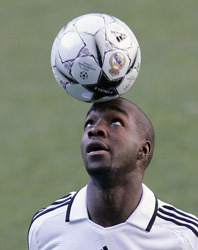 Spurs face arch-rivals Arsenal in the Carling Cup on Tuesday night, live on Sky Sports 2 at 7.45pm – Get all the best betting tips and odds here.

Lassana Diarra has sought to quell speculation regarding his future by committing himself to Real Madrid.

Reports suggest that the midfielder could soon be on his way out of the Spanish capital after falling out of favour at the Bernabeu. It is claimed that Manchester United are the currently leading the chase for his signature, with Sir Alex Ferguson prepared to move in January to land the France international.

Diarra, though, insists he is happy to fight for his place at Real.

He said: “I have no comment to make. I am a Real player and all I want to do is to play week in, week out at this club.”

Reports in Spain suggest Real could be prepared to part with the 25-year-old, who has played second fiddle this season behind Xabi Alonso and Sami Khedira, for around €24million

La Liga outfit signed Diarra from Portsmouth in January 2009 and are keen to recoup the sizeable outlay it took to bring him to Spain.

Spurs face arch-rivals Arsenal in the Carling Cup on Tuesday night, live on Sky Sports 2 at 7.45pm – Get all the best betting tips and odds here.