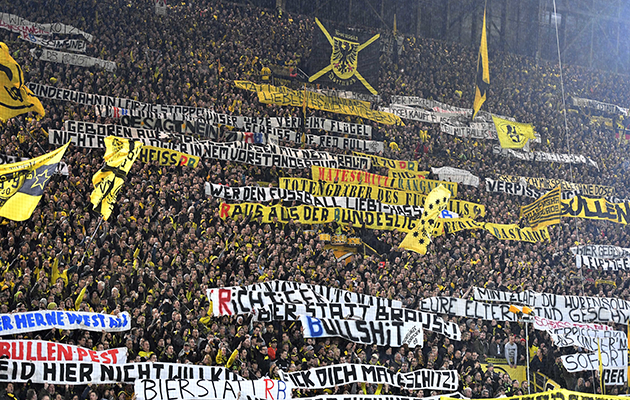 1. Mob rule in the Ruhr
Convinced that Red Bull franchise club, RB Leipzig, represents an existential threat to the German game, Dortmund fans emphatically made their feelings known in their side’s 1-0 home victory over the easterners at the weekend.

The word ‘hostile’ would not begin to describe the atmosphere at the Westfalenstadion and the hardcore ‘Sudtribüne‘ terrace was one vast sea of anti-RB banners. A pre-watershed selection: “For you only marketing – for us a reason to live.” “We are what money can’t buy.” “Whoever loves football, hates RB.”

Nor was the protest merely visual. En route to the ground, visiting Leipzig fans were pelted with stones, cans and flares; six RB supporters and four police officers were injured and 28 arrests made.

“I’d never seen so many hate-filled faces in my time in the force,” said an on duty policeman. “It was shocking. They didn’t care that they were attacking women, children and families. ”

In a statement on their official website, Dortmund apologised to the Leipziger, condemned the mayhem and promised to bring the guilty parties to book.

“Those who prefer violence and insults to peaceful argument cannot be part of the Borussia Dortmund family.”

On the field of play, striker Pierre-Emerick Aubameyang once again was the Schawarz-Gelben hero, nodding home late in the first-half following excellent work wide on the right by young gun, Ousmane Dembele.

2. Blunt Bayern
With their Champions League Round of 16 tie with Arsenal just around the corner, Bayern certainly are not giving the impression of a team capable of taking Europe by storm.

Although victorious their first two games of the Spring Championship – against Freiburg and Bremen – they have far looked from convincing and were again lacklustre and disjointed in the 1-1 win draw with Schalke at the Allianz-Arena on Saturday.

For all the star names they boast in the attacking-third, they are struggling to carve out decent openings and have acquired a tendency for early defensive doziness ; the free-kick equaliser fired in by Schake centre-back Naldo was the fifth time they have conceded in the opening quarter-of-an-hour in the Bundesliga this season.

The one shaft of sunlight for the Bavarians is the killer form of Polish marksman, Robert Lewandowski. He is at the peak of his powers and already has amassed 15 goals in 2016-17, the latest being a deft chipped finish past Schalke keeper, Ralf Fährmann.

Another Bayern star celebrating was skipper, Philipp Lahm, who now has clocked up 500 competitive games for the club. Rumour has it, he is on the verge of calling it a day.

3. Punishment deferred, not avoided
Leverkusen and Turkey playmaker, Hakan Calhanoglu, will have to sit out the rest of the season after the Court of Arbitration for Sport ruled that he must serve a four-month FIFA suspension for breach of contract.

His crime? Reneging on an agreement to leave Karlsruhe for Turkish side Trabzonspor back in 2011. Talk about the wheels of justice grinding slowly.

“This decision doesn’t seem justified to us,” declared ‘Werkself’ director of sport, Rudi Völler. “Bayer Leverkusen had absolutely nothing to do with those events six years ago. Yet we end up being severely punished. We’re losing important player for the decisive phase of the season.”

The 22-year-old may have played his last game for Leverkusen. He has been linked with a move to the Premier League, with at least two top-six sides interested.

4. High-flyers talking survival
Almost without anyone noticing or giving them proper credit, Eintracht Frankfurt continue to make headway in their surprise bid for a first piece of the Champions League action.

Currently third in the Bundesliga, their 2-0 victory over Darmstadt in the Hesse derby was their 10th win out of 18 this term and they only have lost twice since early October (away to Wolfsburg and RB Leipzig).

They might not be a free-scoring outfit, only racking up 25 goals this term. Nor do they go in for artistic niceties. But defensively they are a bank vault and in Mexican attacking midfielder Marco Fabian they have unearthed a real gem, bought for just 3.7 million euros from Guadalajara last summer.

Plenty for the Waldstadion faithful to get excited about, though don’t expect coach Niko Kovac to follow suit.

“I know many here are dreaming of Europe,” says the former Croatia boss. “However what’s important to me is the gap we’ve opened on teams lower in the table. Right down to the 16th placed side.”

5. Roll up, roll up
All those who pour scorn on the likes of Hoffenheim for being a village team without tradition, would have been feeling especially vindicated on hearing the weekend’s attendance figures.

Despite enjoying a wonderful campaign – beaten only once and sitting pretty in fifth – the All-Blues still find it impossible to achieve sell-outs at their Rhein-Neckar Arena home and for the 4-0 hammering of Mainz on Saturday were a good 4,000 spectators short of a 30,000 full-house.

While average gates have gone up this season (from 25,514 to 27,788), empty seats is not a good look for such an ambitious club and coach Julian Nagelsmann recently made an appeal for fans to turn up in greater numbers.

“It does annoy me a little, ” admits general manger, Alexander Rosen. “We’re playing good football and are successful. The team doesn’t deserve this.”