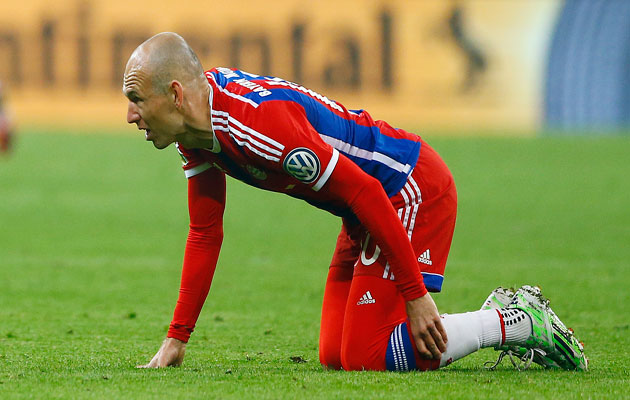 Bayern Munich have suffered a huge setback with the news that Arjen Robben will miss the rest of the season after tearing a calf muscle, while Robert Lewandowski has suffered a double break.

Robben returned from injury for Bayern in Tuesday night’s penalty shoot-out defeat to Borussia Dortmund but lasted just 16 minutes before limping ouyt of the action.

Tests have confirmed that the Dutch international, who is Bayern’s top scorer in the Bundesliga this season with 17 goals, has torn a calf muscle and will not play again this season.

Attention #FCBayern fans. You might wanna sit down. Here comes the official injury news regarding #Robben and @lewy_official…

Arjen #Robben has a tear in his left calf muscle. His season is over.

Robben’s injury comes less than a fortnight after the departure of Bayern’s team doctor, Hans-Wilhelm Müller-Wohlfahrt, after a row with coach Pep Guardiola.

Lewandowski was injured in a collision with Dortmund goalkeeper Mitchell Langerak and was taken to hospital. Tests have revealed a break to his jaw and nose as well as concussion.

Despite the extent of the injuries, Bayern are still hopeful that the Polish striker will be able to play a part in next week’s Champions League semi-final firat leg at Camp Nou.

Bayern suffered a somewhat farcical shootout defeat to their Bundesliga rivals, with both Phillip Lahm and Xavi Alonso sending their efforts over the bar after slipping on the wet turf.