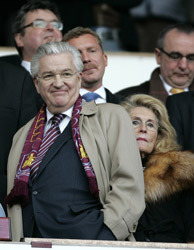 The country’s business minister, Bjorgvin Sigurdsson, was asked to freeze the overseas assets of some of the country’s top businessmen in a bid help investors caught up in the nation’s banking crisis.

Such a move, which has not been ruled out by Sigurdsson, could leave the troubled club in peril.

The development came as it emerged that the Premier League’s chairman, Sir David Richards, called West Ham directors to seek reassurances over the club’s financial position. Although West Ham tried to allay fears over the financial crisis, it is known the League are monitoring the situation closely.

Gudmundsson was removed from the chairmanship of Landsbanki by the Icelandic government and is estimated to have lost £230m when it was nationalised.

Relations between his nation and Britain deteriorated yesterday after the Icelanders refused to guarantee deposits made by British investors in Landsbanki. The British prime minister, Gordon Brown, responded by declaring he wanted to freeze the assets of Icelandic companies in Britain, adding: “We will take further action against Icelandic authorities wherever necessary to recover the money.”

Gudmundsson is believed to have a 95% stake in WH Holdings, the company that bought the club in November 2006. However, West Ham’s parent company is registered in the UK and the club will be confident that it will not be affected by either the Icelandic or British government’s actions.

They have received assurances from Gudmundsson that Iceland’s economic crisis will not affect his long-term commitment to the club or force manager Gianfranco Zola to sell players that he wants to keep. However, it is undererstood West Ham have millions of pounds in loans from a syndicate of five banks, some of which are believed to be Icelandic.

The club’s most recent set of accounts, to the year end May 31, 2007, show West Ham had a net debt of £51 million. Notes to the accounts reveal an additional loan of £21.859 million from a syndicate of three banks. Two further loans, for £8.3 million and £5.55 million, are also mentioned.