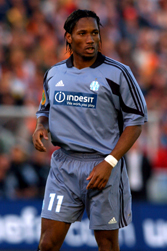 Didier Drogba, who last night joined Chelsea from Marseille in a deal worth £23.8m, is convinced that he has made the right move.

“It is the right choice for me to go to Chelsea,” said Drogba.

“Neither I nor Marseille could refuse this offer from Chelsea. What truly convinced me that they wanted me was the personal telephone calls I received from Mourinho.

“I also had offers from Italian clubs but going to Chelsea is an interesting challenge. I want to continue to progress alongside players of the quality of Mateja Kezman, Adrian Mutu, Claude Makelele and Arjen Robben.

“I will never forget my year with Marseille but it is their desire that I should leave and mine as well.”

Drogba, a 26-year-old Ivory Coast international, flies to London this morning to sign a four-year contract worth £66,350 a week.

“We reached definitive agreement for Didier Drogba’s transfer to Chelsea with [the chief executive] Peter Kenyon at the start of the afternoon,” said the Marseille chairman Christophe Bouchet. “The player will leave for London on Tuesday.

“Didier leaves a big void but you have to know when to be pragmatic. With this money we are going to build a better team again and bring a healthier complexion to our finances. The long-term future of the club had been in jeopardy.”

In total, Chelsea owner Roman Abramovich has spent close to £200m since buying the club 12 months ago.