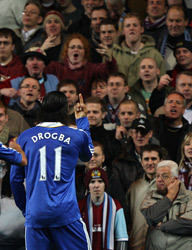 Didier Drogba has been given a three-match ban by the FA for violent conduct following the coin-throwing incident against Burnley.

The Chelsea striker was charged by The FA last week after he made an offensive gesture and threw a coin back at the visiting fans during his side’s Carling Cup defeat at Stamford Bridge last Wednesday.

Drogba issued an immediate post-match apology and admitted the charge on Monday. He also faces a police investigation into his actions.

An FA statement read: “At a regulatory commission today, Chelsea forward Didier Drogba was given a three match suspension.

“Drogba admitted a charge of violent conduct. The charge related to Drogba throwing a missile into the away section of the crowd after scoring during the League Cup match against Burnley at Stamford Bridge on Wednesday 12 November.

“Drogba will serve the suspension with immediate effect.”

The FA has also written to both Chelsea and Burnley to request information on a number of missiles thrown at Chelsea players from the Burnley section.

An FA spokesman said: “Players should be able to play football without fearing for their personal safety.

“It is totally unacceptable for players to be put in danger by supporters throwing missiles onto the pitch.

“The priority now is to work with the clubs and the police to identify the individuals involved.

“The FA wants anyone found guilty of throwing missiles to face the strongest possible action. That includes life bans from attending football matches.”