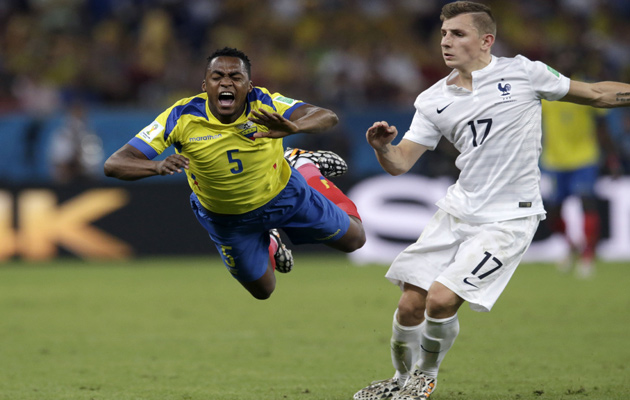 Match overview: France topped Group E after a goalless draw with Ecuador who now head home after failing to match Switzerland’s victory over Honduras. Ecuador faced an uphill battle after captain Antonio Valencia was sent off early in the second half for a studs-up tackle on Lucas Digne. France peppered the Ecuador goal with shots but could not find a way past Ecuador keeper Alexander Dominguez. Karim Benzema, Paul Pogba, and Antoine Griezmann, along with substitutes Olivier Giroud and Loic Remy, all had good chances to seal a third group victory for France, but they either missed the target or were denied by Dominguez.

Key moment: The sending-off of Ecuador captain Antonio Valencia, early in the second half, put Ecuador on the backfoot as they sought the win needed to take them into the last 16.

Man of the match: Ecuador keeper Alexander Dominquez kept his side in the match with a string of saves in the second half.

Matter of fact: Ecuador were the only South American side to fail to qualify for the knockout stage.

Talking point: Mamadou Sakho and Olivier Giroud both used elbows against opponents but the incidents went unseen by the match officials. With FIFA using video evidence in disciplinary proceedings against Luis Suarez, will Sakho and Giroud now face retrospective punishment?