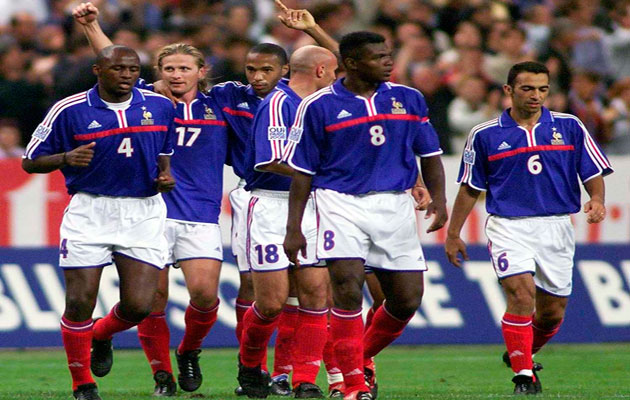 Emmanuel Petit has accused France of being “hypocritical and cowardly” over a lack of regard for Thierry Henry, saying that he sometimes thinks it would have been better if the country had been “overrun by the Germans”.

Although Henry has not officially announced his retirement, he appears to have played his last game as a professional following New York Red Bulls’ MLS Cup elimination at the weekend.

The end of what has been an illustrious career spanning 20 years has not gone unnoticed in England, where Henry spent eight years with Arsenal, who unveiled a statue of the striker outside the Emirates Stadium in 2011, to mark his contribution to the club.

Henry, though, does not enjoy the same the levels of popularity in his homeland – despite being a member of France’s World and European Championship winning sides of 1998 and 2000.

“In England, they’ve built a statue of Thierry,” the ex-Arsenal midfielder, Petit, told Sports.fr. “That means a lot. He’s adored there. It bothers me.

“What can we reproach Henry for? His handball against Ireland? He helped France qualify for the World Cup in South Africa. He has done nothing.

Although Henry’s involvement in the infamous players strike at the 2010 World Cup is unlikely to have endeared him to the French public.

“France is hypocritical and cowardly,” continued Petit. “Sometimes I think that if we’d been overrun by the Germans, we’d be better run.

“He’s not hated but he’s certainly not loved. He got screwed by the French press after his handball and has since not spoken to the French media.

“In France, he has no collusion with the press, so what? Perhaps because he was not smiling when he scored for les Bleus! Well, that’s what I hate in this country.

“I have great difficulty with the French, I have never seen such arrogant, smug, lying and hypocritical people.”