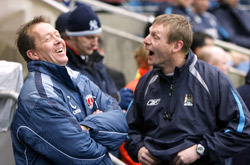 Manchester City manager Stuart Pearce believes he is unlikely to be next coach of the England national team, although he admits he would be interested in the position.

Pearce, along with Charlton’s Alan Curbishley and Bolton’s Sam Allardyce, is believed to be the leading English candidate in the running to replace Sven Goran Eriksson, but the former England defender does not regard himself as the likely successor.

“I don’t think when the job is being given out I will be in the hot seat, that’s for sure,” said the 43-year-old.

Pearce revealed last week would be willing to talk to the Football Association about the vacancy.

Allardyce has already indicated that the job should go to an English coach.

“If the FA are talking about the next England manager being British it is good news for everyone in this country,” he said.

“The public seem to want that, so obviously I would want to go that way – not just from the point of being in contention but because I am English.

“It is very important for this country – and for the FA – to go down that route because we are all taught through their system and we are all going through the curriculum for the badges and qualifications.”

Meanwhile, Charlton’s Curbishley has asked the FA to delay their decision until the end of the season.

“The situation should be clarified,” said Curbishley.

“In my opinion, the FA should turn round and say they will not make an announcement until after the final Premiership game on 7 May, which will just allow everyone to get on with what they have to do.

“All we are getting at the moment is ‘Curb Watch’, ‘Pearce Watch’ and ‘Sam Watch’, plus a fictional horse race with our heads on little horses seeing who is in front.

“It is not distracting but all three of us have important jobs to do. There is still three months of the season left and every day someone is saying something else.

“Who knows what people are thinking. I just think we should all be given a chance and the FA say they are not going to talk about it until after the season is over.”

Despite the claims of the English trio, the bookmakers favourite for the post remains former Celtic boss Martin O’Neill.

The 53-year-old Northern Irishman has also been strongly linked with Newcastle manager’s job.