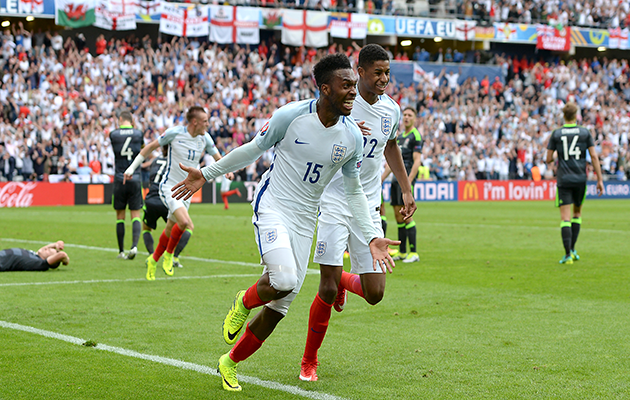 Substitute Daniel Sturridge snatched an injury-time winner as England came from a goal behind to beat Wales 2-1 in Lens. It was a cruel ending for Wales, who looked to have held on for a point against an England side that showed familiar frailties while chasing the game at another major tournament.

England had been booed off at half-time after Gareth Bale had given Wales the lead with an audacious free-kick which slipped through the hands of England keeper Joe Hart.

Roy Hodgson threw caution to the wind in the second half, bringing on strikers Jamie Vardy and Daniel Sturridge at half-time, and both substitutes played their part in England’s first victory of the tournament. Vardy equalised when he pounced on a loose ball headed back towards goal by Wales captain in the 56th minute. And then Sturridge popped up to score the dramatic winner in injury time.

Daniel Sturridge’s dramatic late equaliser. Just as it looked as if Wales would hold out and England’s search for a winner was in vain, Sturridge dodged his way through the Wales back line. When full-back Chris Gunter slipped, Sturridge was able to poke the ball over him and inside Wayne Hennessey’s near post.

Wales struggled to cope with the runs down the right flank of Kyle Walker. His cross was headed down by Wales defender Ashley Williams, into the path of Jamie Vardy, for England’s equaliser.

This was the first time that England won a game at a major tournament after being behind at half-time.

Roy Hodgson had earned praise for his positive mindset in selecting five forwards in his tournament squad. Yet against Wales, he opted for the one striker, Harry Kane, flanked by winger Raheem Sterling, who missed England’s best chance of the first half, and midfielder Adam Lallana.

To Hodgson’s credit, he made bold changes at the break, replacing Kane and the ineffective Sterling with Jamie Vardy and Daniel Sturridge. It was Kane who claimed the equaliser 10 minutes into the second half. England ended the match with a three-man forward line, Marcus Rashford having replaced Lallana, and their pressure told when Sturridge grabbed a late, late winner.

A cruel end for Wales, but England’s place in the tournament – and Hodgson’s reputation – had been rescued.