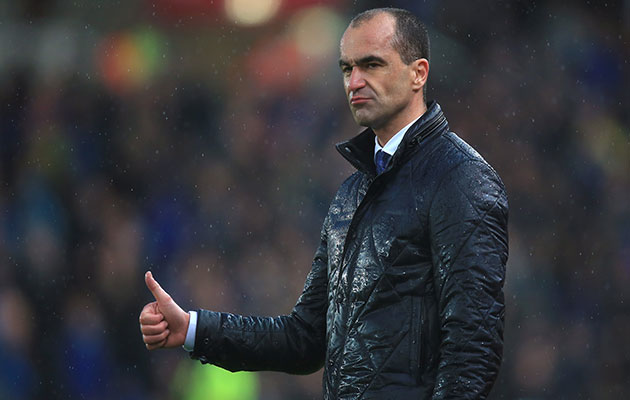 Roberto Martínez believes bright times are ahead for Everton following billionaire Farhad Moshiri’s decision to purchase 49.9% of the club.

Moshiri, a British-Iranian businessman, has an agreement in place to become majority shareholder while he initially works alongside chairman Bill Kenwright. The 60-year-old is valued at £1.3bn and will become Everton’s major shareholder once the deal receives Premier League approval.

Martínez describes the Monaco-based businessman as “a gentleman with incredible values” and is confident that Everton’s hopes of regularly competing for a place in the UEFA Champions League club will receive a significant boost through the new investment.

“Straight away you get challenged internally and we have to show we are ready to take the club to the next level,” said Martínez. “You can feel the excitement around the place and we need to take that on to the pitch at Aston Villa tomorrow.

“When I started at Everton our ambition was that we have to look at the Champions League positions and become a winning team, that is a broad statement but difficult to achieve. The investment from Farhad Moshiri will take us to a different level in terms of being able to get there. It can accelerate the process.

“It is clearly an exciting time. Every Evertonian should know the new investor understands the history of our club, has fallen in love with the club and will be a strong addition. He is not someone who brings anything other than getting Everton to where we want to belong.”

Moshiri held a 15% stake in Arsenal for nine years before selling to business partner Alisher Usmanov on Friday and agreeing a stake in Everton that values the Goodison Park club at £175m.

Martínez said: “He knows the Premier League inside out because he’s been involved in another club. He knows how difficult it is to have a vision and to put that into practice. Sometimes it is difficult for businesspeople to understand that process in football but that’s not the case here. He knows what it takes.

“He’s been introduced to Everton, he’s followed the club and understands the heritage and history and that’s really exciting. The arrival of Farhad Moshiri is something for every Evertonian to be excited about.

“There’s been talk of possible investors and a lot of interest in the club but the chairman has assessed every phase behind them, and what we have is probably the perfect person to fit in. You can’t say that lightly. We won’t lose any of the good things that we have. It’s the opposite, it’s the start of a new era.”