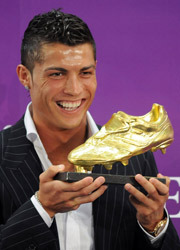 Cristiano Ronaldo says he is still two to three weeks away from a return to competitive action for Manchester United.

“I hope to come back in two to three weeks,” he told World Soccer in Madeira where he received the ESM Golden Shoe as top league scorer in Europe last season.

Reports have claimed that Ronaldo could return for Manchester United’s Champions League game against Villarreal this week. Ronaldo spent the weekend in Madeira, his birthplace, and on Saturday night attended a televised ceremony where he was presented with the Golden Shoe trophy.

“ESM gave me the opportunity to choose where I received the award. Of course I chose Madeira. It’s my place, a special place.”

“It’s wonderful to win the Golden Shoe, it’s a great honour, especially because my position is a winger. Normally strikers win this award. So I’ve made a little bit of history.”