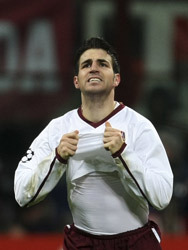 Cesc Fabregas has told Spanish radio that he would love the opportunity to play for Barcelona – possibly as early as next season.

The Arsenal midfielder admitted he opted to stay at Emirates because he wanted to try and win trophies at Arsenal this season, but admits he will then look at his options.

“Right now I’m fine at Arsenal but I cannot deny that to return and play for Barca would be a dream come true,” he told Catalan based station RAC 1.

“I chose to stay at the club last summer and right now I’m totally focused on the reason for that decision which was to try and win trophies.

“We’ll see how things have gone by the end of the season.

“The fact is that Barca are playing cinematic football right now and it’s fantastic to see that the other day when they beat Atletico Madrid 6-1 they had seven or eight guys who, like me, came through the club’s youth system.”

Fabregas, who left Barca for Arsenal as a 16-year-old, admits he still loves to watch his former team-mate Lionel Messi.

“Messi is the best player in the world and he has been for a long time, never mind what people used to think about Ronaldinho in his prime,” he said.

“During Messi’s football life I’ve seen him do incredible things on a football pitch, as a kid or now as a leader of the Barca team.”

Fabregas also admitted that he is missing playing alongside midfielder Alex Hleb – who moved to Camp Nou last summer.

“Every week I chat to Alex Hleb on the phone because he’s the guy I most miss at Arsenal. He’s a friend and I also loved playing with him,” he added.

“He always looks for you with a pass and if you give him the ball you can always count on getting it back at the right time.”