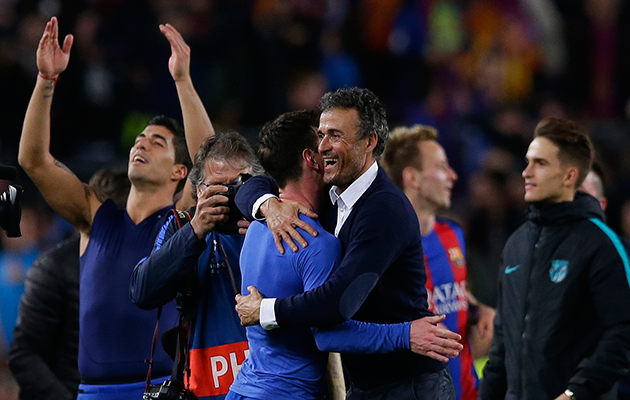 The Spaniard, who on the eve of his side’s scarcely believable 6-1 win, predicted his side could score six goals if required, was speaking after one of the the most incredible comebacks ever witnessed.

Trailing 4-0 from the first leg, Barcelona raced into a three-goal lead early in the second half, courtesy of goals by Luis Suarez, a Layvin Kurzawa own-goal and a Lionel Messi penalty, but when Edinson Cavani reduced the arrears midway through the second half – thus requiring Barca to score six – the tie appeared to be over. However, with the game heading towards stoppage time, the impressive Neymar curled in a free-kick for the home side before two further goals in added time from Neymar (from the penalty spot) and Sergi Roberto completed an amazing turnaround.

“I was brought to my knees,” said Luis Enrique, who recently announced he is leaving at the end of the season,.

“I would like to thank everyone who kept their faith after we lost 4-0. This is dedicated to them because this isn’t the Harlem Globetrotters, this is football.

“It is difficult to explain in words. This is a sport for crazy people, a unique sport. Any kid who was in the Camp Nou tonight will never forget this in their life. It was a torrent of feelings. I don’t cry – I would like to, but the tears don’t come out. But I enjoyed this as much as the rest; as much as those who cried.”

“I say to Sergi Roberto: ‘You used to score for the youth team, why do you never do it for the first team?. And then, what the hell, he goes and gets that goal tonight. I am delighted for him – I have a lot of trust in him and affection for him.

“Faith is the word that best defines this tonight. Above all, this is a victory of faith. The faith the players showed, the faith the supporters showed. I have only ever seen the stadium like this once before, and that was back when I was playing. Normally with 10 minutes to go, people are leaving the stadium. But tonight they didn’t. If any went, stuff them, they have missed an historic night. In the end we have had a special night.

“I would like to dedicate this to all Barcelona fans, but especially those that kept supporting us after the 4-0 [in Paris]. We had that mourning on Valentine’s Day, and we were given a good going over. We had nothing to lose today, we had lost everything in Paris. But this wonderful sport is unique, it always gives you the chance for revenge.” 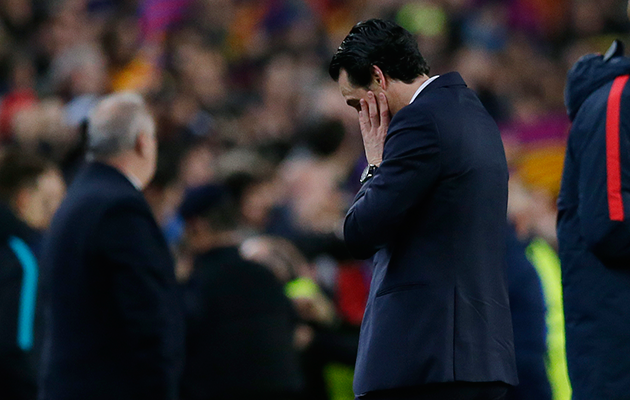 The PSG coach, Unai Emery, whose job is on the line after the horrendous capitulation in Camp Nou, blamed his players for failing to see out the tie.

“When we analyse it, it is true that we have missed a major opportunity,” said the Spaniard.

“The first half was our fault and we didn’t manage to press or do things with the ball. We defended very deep and they had more chances to score. We made mistakes for the two first-half goals.

“We were calmer in the second half and better positioned. We improved and had a chance for 3-2. The refereeing decisions went against us and we lost everything in the closing minutes. Barcelona are capable of doing that. It was all or nothing for them in the final minutes. There’s no explanation for what happened.”