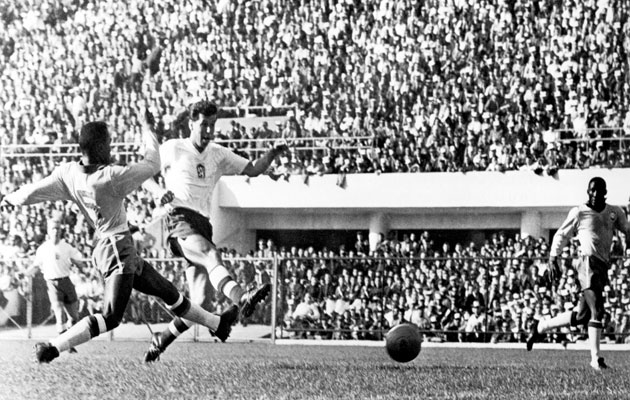 Different football generations view their heroes from their own perspective. Czech fans are no different. For some their greatest player was Pepi Bican from the 1930s and 1940s; for some the recent Pavel Nedved. For all others inbetween it was Josef Masopust, who has died today at 84.

A memorial tribute should precede tomorrow’s final of the UEFA Under-21 Championship between Sweden and Portugal in Slavia’s Eden Stadium in Prague. But it was not with either Slavia or their great old city rivals Sparta with whom Masopust made his name, but the then army club, Dukla.

This writer had the privilege of meeting and interviewing Masopust along with some of his old Dukla and Czechoslovakia team-mates just over a year ago. He was modest, humorous and still a passionate follower of the game even if attending matches regularly was no longer possible.

The respect in which he was held then and back in his playing days in the 1950s and 1960s was obvious from the manner in which old team-mates – Vaclav Masek and Josef Jelinek among them – referred to him deferentially as “Mr Masopust.”

Such respect traced back to their playing days. Jelinek said: “When I joined Dukla in the late 1950s it was the army club and we all wore uniform off the pitch and the older players had ranks. After I had been playing there two weeks, Mr Masopust said to me: ‘I know I am a captain but you don’t have to call me that on the pitch.'”

Masek recalled: “I played two years with Dukla during my national service but otherwise I played all my career with Sparta. So I knew Mr Masopust as both a team-mate – also for the national team – and as an opponent. I used to hate playing against him because he was such a commander on the pitch.

“He always seemed to be one move ahead of you all the time, always one step ahead.”

History records Masek as the then scorer of the fastest goal in World Cup history, after only 16 seconds against Mexico in the group stage of the 1962 World Cup in Chile. Inevitably, Masopust had delivered the slide-rule pass which he converted.

Masopust was nominally the left-half but his interpretation of the role was more akin to the old-fashioned attacking centre-half who was the central focus of the team. He was still performing that way, at 34, when he – along with fellow Czechoslovak halfbacks Svatopluk Pluskal and Jan Popluhar – played in the Sir Stanley Matthews Farewell Match at Stoke City’s old Victoria Ground in 1965.

That was not Masopust’s first footballing visit to England. Far from it. He had appeared for the Rest of the World against England in the FA Centenary Match in 1963 and, even earlier in the European Cup, he and Dukla had lost narrowly to Manchester United’s pre-Munich ‘Busby Babes in 1957 and to Tottenham in 1962.

He was at his peak then. At the subsequent World Cup finals Czechoslovakia beat Spain 1-0, drew 0-0 with holders Brazil then lost 3-1 to Mexico but qualified in second place for the quarter-finals. They then beat Hungary 1-0 and Yugoslavia 3-1 to reach the final, back against Brazil in Santiago.

Masopust darted through the middle to shoot them ahead after 15 minutes; it was one of his 10 goals in 63 internationals. Brazil equalised two minutes later, however, and went on to win 3-1.

Wistfully, Masopust recalled: “Of all my memories it was the best of all my career to be playing in the World Cup Final – and we were so close [to winning]. At first we were disappointed to bring away only the silver medal because not only had we reached the final but we had been in front. But a few weeks later we were happy we had won silver.”

Masopust’s personal consolation was to be hailed European Footballer of the Year, the first eastern European winner of the award.

Born in Most, 50 miles northwest of Prague on February 9, 1931, Masopust played for the local team and then joined Dukla – and the army – in 1952. He won eight league titles and four cups before being permitted to move abroad to Belgium where he led Crossing Molenbeek, as player-coach, to promotion.

Later he guided Zbrojovka Brno to the Czechoslovak league title, was national coach for four years and worked for a while in Indonesia.

But it is as a player – and a great one, whatever the generation – that his name deserves to be remembered.