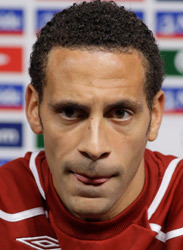 Rio Ferdinand has admitted that the England team had become a ‘circus’ before the appointment of Fabio Capello.

Ferdinand believes the 2006 World Cup campaign was undermined by the celebrity culture, when the squad were stationed at Baden-Baden and were accompanied by their wives and girlfriends.

Manchester United centre-back Ferdinand will lead England against Belarus on Wednesday night as they look to secure a fourth successive victory in the 2010 World Cup qualifying campaign.

And he believes that Capello, who succeeded Steve McClaren, has brought a business-like attitude to the England set-up that was lacking under McClaren’s predecessor, Sven Goran Eriksson.

“We became a bit of a circus, if I’m honest, in terms of the whole WAG situation,” said Ferdinand. “It seems like there was a big show around the whole England squad.

“It was like watching a theatre unfolding and football almost became a secondary element to the main event.

“People were worrying more about what people were wearing and where they were going, rather than the England football team.

“That then transposed itself into the team. This regime is very water-tight. If I’m honest, it feels as if we’re going in the right direction.

“I don’t want to speak too soon, but you can see we’re at the start of something and, hopefully, there’ll be bigger rewards than what we’ve had in the past.”

Ferdinand admits it would have been better for the squad to have spent less time with their families during the last World Cup.

“That’s said in hindsight,” he admitted. “You were caught up in the bubble. Being somewhere like Baden-Baden, walking around the town, there were paparazzi everywhere and we were among journalists as well, our families were there.

“When you step back and look back at that, you think like it was a circus.

“I’m not going to tell the other players what you should or should not do. But, I just think that, as a squad, we were a bit too open, going out in and around Baden-Baden, and probably had too much contact with families.

“You don’t get many tournaments in your career. To give yourself the best chance, you have to be focused.”