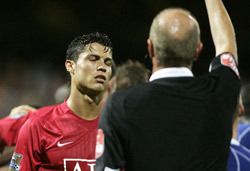 Ronaldo begins a three-match ban on Sunday following his sending off at Portsmouth on Wednesday when he aimed a headbutt at Richard Hughes.

Ferguson feels Ronaldo was provoked by intimidating tactics by opponents and was not helped by an unwillingness by officials to punish dangerous tackles.

“There is every chance Cristiano could get a serious injury, Ferguson said. “I have noticed over the last few months, referees seem to be more tolerant of physical contact. A lot of late challenges have gone unpunished and on Wednesday that happened time and time again. I don’t know whether referees have been instructed to manage these situations but to me, it is black and white.

“That does not mean players should get away with doing stupid things on the pitch, but there is a concern players like Ronaldo are going to be the victims. Cristiano fell for a 100-year-old trick, but it is very difficult to completely punish him or to be angry with him because some of the things that happen to him are not right.

“You are not going to change Ronaldo,” Ferguson said. “He is a player who is going to attack defenders. He does it all the time. There is no-one better at that, it is what we want to see.

“But when you have a weak referee, like on Wednesday night, you are going to be suffering. I am not saying the red card was wrong because the minute you lift your hand or motion towards someone with your head, you know the result. But the guy grabbed him round the neck prior to that.”