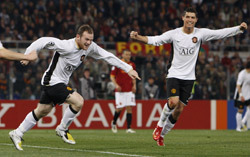 Ronaldo & Rooney do it again as Man Utd posted a famous 2-0 win in their 1st-leg Qtr-final Champions League tie & are now clear favourites to win the competition. Click here for the latest outright betting!

Sir Alex Ferguson is confident his Manchester United side can reach the Champions League semi-finals after a 2-0 first-leg victory at Roma.

Goals from Cristiano Ronaldo and Wayne Rooney put United in a strong position ahead of the return game at Old Trafford on 9 April.

“We can’t take anything for granted, but we definitely feel like we can reach the semi-finals,” said Ferguson.

“It was a marvellous result. We showed discipline and composure on the ball.

“We rode our luck in the first 15 minutes of the second half. You get those breaks sometimes – and we did.”

The Scot said United would have to be wary of the return of Roma talisman Francesco Totti next Wednesday.

“We know Totti’s abilities,” Ferguson said. “He’s an inspirational figure for Roma, but we hope Old Trafford on a European night will be ready for us.”

Ronaldo’s opened the scoring for United with his 36th goal of a remarkable season, and Ferguson praised the bravery of the Portuguese winger.

“Ronaldo’s goal changed the game for us. It was a fantastic header,” said Ferguson.

“His spring and courage to go in front of the defender surprised the Roma player.

“It was a centre forward’s header – it reminded me of myself.”

United did suffer the setback of losing central defender Nemanja Vidic with a knee injury after 33 minutes and Ferguson said the injury looked like it might be serious.

“I pray it is not serious, because he is such an integral part of our team,” said Ferguson.
“We think it might just be a nerve injury but we can’t be sure at this moment.”

Roma coach Luciano Spalletti is hoping that performance, if not the result, will give his side confidence heading into the return leg.

“They were lucky on their scoring chances,” he said. “They have players of very high quality.

“But we’ve got to react after what happened and reverse the situation. We’ve scored twice away before in the Champions League.”

Ronaldo & Rooney do it again as Man Utd posted a famous 2-0 win in their 1st-leg Qtr-final Champions League tie & are now clear favourites to win the competition. Click here for the latest outright betting!