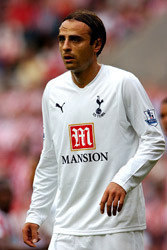 Thursday is a big day of UEFA Cup action and we’ve got every match covered in our Best Price Odds Coupon.

Dimitar Berbatov’s hopes of a move to Manchester United look to have dwindled after Sir Alex Ferguson said he was “less optimistic” about making any new signings before the transfer window closes on August 31.

The United boss, who had a £20.5m bid for the striker turned down by Spurs, was unsure whether he would be making any new additions to his squad.

“I’ve no idea what’s going on. It’s very hard to get communication with some people in life.”

Berbatov has made no secret of his desire to leave White Hart Lane but Tottenham are refusing to reduce their £30m price-tag on the Bulgarian.

Spurs manager Juande Ramos left the 27-year-old out of his squad for Saturday’s defeat by Sunderland, and after the game, first-team coach Gus Poyet admitted the club had no idea if Berbatov would still be a Spurs player by the time the transfer window closed.

Asked if that meant Berbatov was on his way out, Poyet shrugged and said: “What can I say? I think the best thing is to wait to 1 September.

Thursday is a big day of UEFA Cup action and we’ve got every match covered in our Best Price Odds Coupon.