Several defendants charged in a wide-ranging corruption case involving Fifa are in negotiations with US officials about possibly pleading guilty, a U.S. prosecutor has revealed

Assistant US Attorney Evan Norris spoke at a hearing in Brooklyn federal court after US. District Judge Pamela Chen set a Nov. 6, 2017, trial date for seven former officials and one former marketing executive.

“We are in ongoing plea discussions with several of these defendants,” Norris said.

The eight defendants, who have all pleaded not guilty, are among the 42 individuals charged in the investigation into football’s governing body.

US prosecutors accuse the defendants of being involved in schemes concerning more than $200 million in bribes, which were related to marketing and broadcast rights to tournaments.

To date, 16 people and two sports marketing companies have pleaded guilty to US charges.

In court on Monday, Norris said prosecutors were still reviewing hundreds of thousands of documents handed over after US officials asked their Paraguay counterparts to search the headquarters of CONMEBOL, the South American confederation based in Asuncion.

New evidence continues to come in, he said, including 24 binders of documents provided last week by Swiss authorities.

The plan to try all eight defendants together is expected to be challenged by lawyers for Napout, Takkas, Marin and Rocha, who said they would all file motions to have separate trials.

An attorney for Napout also said he would move for a quicker trial. 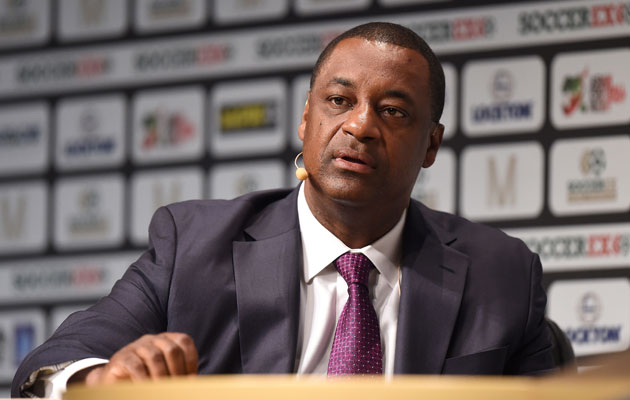 disgraced former CONCACAF president Jeffrey Webb, who faces racketeering charges in the US.

The case is listed as U.S. V. Webb, 15-cr-00252, U.S. District Court, Eastern District of New York (Manhattan). Jeffrey Webb, from the Cayman Islands, was president of the central and north American confederation CONCACAF and a vice-president of Fifa when he was detained in Zurich in May 2015.

He has indicated guilty pleas and is currently under house arrest at a property he owns in Georgia.

Jack Warner, his predecessor as CONCACAF president, and Nicolas Leoz, a former president of CONMEBOL, are fighting extradition applications in Trinidad & Tobago and Paraguay respectively.