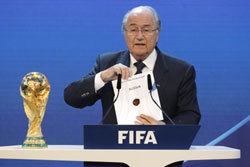 It’s back! Easyodds tipsters Simon Hopper, Andy Newton and Tom ‘The Power’ Powell give their updated views on the key Premiership markets after round 16. Listen to all of their tips here.

FIFA president Sepp Blatter has dismissed talk of corruption at football’s governing body after Russia and Qatar won the right to host the 2018 and 2022 World Cups, calling England “bad losers” for their reaction TO LOSING THE VOTE.

“To be honest, I was surprised by all the English complaining after the defeat. England, of all people, the motherland of fairplay ideas,” Blatter told Weltwoche.

“Now some of them are showing themselves to be bad losers,” he said. “You can’t come afterwards and say so and so promised to vote for England. The results are known. The outcome came out clearly.”

Roger Burden, acting chairman of the Football Association, withdrew his application for the permanent position last week, saying he could no longer trust FIFA members after the failure of England’s bid to win the vote to host the 2018 World Cup.

He added that England’s bid team in Zurich, which included Prime Minister David Cameron and the second in line to the throne, Prince William, were promised votes which had not been delivered by FIFA executive committee members.

Blatter said the reaction of the losing bidders showed some did not understand his drive to expand football’s frontiers.

“I really sense in some reactions a bit of the arrogance of the western world of Christian background. Some simply can’t bear it if others get a chance for a change,” he said.

“What can be wrong if we start football in regions where this sport demonstrates a potential which goes far beyond sport?” he said.

Blatter rejected the claims and said he was being targeted by anti-FIFA journalists:

“There is no systematic corruption in FIFA. That is nonsense,” he said. “We are financially clean and clear.”

But Blatter said FIFA could not act as if nothing had happened, adding he wanted to set up a taskforce to look into transparency issues.

“We need to improve our image. We also need to clarify some things within FIFA,” he said.

Asked if he would still be FIFA president to open the Qatar World Cup in 2022, Blatter said: “Definitely not. If God wills it, I will be invited to the opening party on crutches or in a wheelchair.”

It’s back! Easyodds tipsters Simon Hopper, Andy Newton and Tom ‘The Power’ Powell give their updated views on the key Premiership markets after round 16. Listen to all of their tips here.