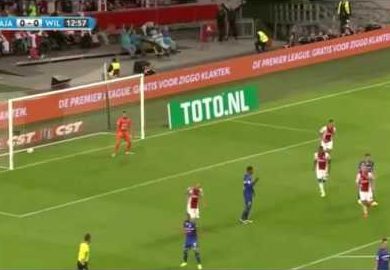 Willem II Tilburg midfielder Anouar Kali became the first player in the Netherlands to be shown a red card on the recommendation of a ‘video assistant referee’ (VAR), after his yellow card in a Dutch Cup tie against Ajax was turned into a red on Wednesday.

Kali was initially booked by referee Danny Makkelie for a sliding tackle on Ajax’s Lasse Schone but the decision was deemed worthy of a red after the VAR studdied a replay of the incident. It was the first time television assistance has been fully employed in on-field decision-making.

Referee Pol van Boekel, who was watching the game on six TV screens at the Amsterdam Arena, examined replays of the 60th-minute incident before communicating his verdict to the on-field referee through a headset. Makkelie then upgraded the yellow to a straight red card.

The VAR can review an incident when asked by the match referee as well as advise officials on the field about incidents they may have missed. The International Football Association Board, which oversees the rules of the game, is expected to decide in 2018 whether to authorise the use of video technology and incorporate it within the laws of the game.

But Wednesday’s intervention confused those present at he Amsterdam Arena as they were not aware of the change.

“We do hope that there will be some communication for the public in the future, they have a right to it,” van Boekel told reporters afterwards.

The two referees will swap roles on Thursday for the Dutch Cup match between Feyenoord and FC Oss as the system undergoes further testing.

Last month, video technology was used as France beat Italy in a friendly international in Bari, although it did not involve stopping the action to study replays.

Coincidentally, Van Boekel was interviewed before the game, providing an insight into his role as the VAR.