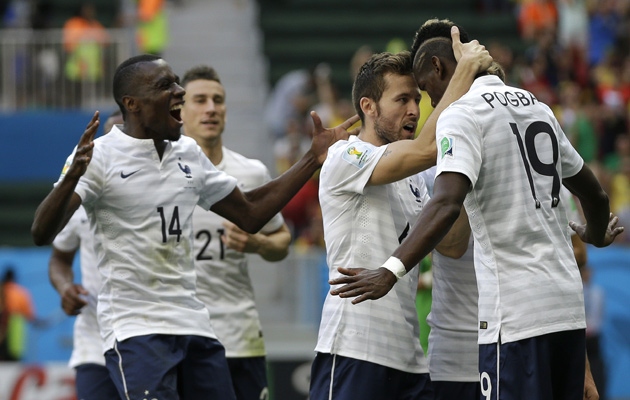 Match overview: France reached the last eight after seeing off the challenge of a spirited Nigeria side in Brasilia. Both sides had chances in the first half, with Emmanuel Emenike’s goal ruled out for a marginal offside. France were frustrated by the Nigeria keeper Vincent Enyeama, who made a string of brilliant saves to deny Paul Pogba and Karim Benzema. But French pressure in the second half finally told. Pogba was unmarked when he headed home a corner in the 79th minute and pressure lively substitute Antoine Griezmann forced Joseph Yobo into a mistake for France’s second in injury time.

Key moment: The 59th minute substitution of Nigeria midfielder Ogenyi Onazi, following an injury caused by a challenge from Blaise Matuidi, who was fortunate to only be booked for the foul. Up until then, Nigeria’s midfield had been solid, creating chances for their forwards, but they lost their shape and France turned the screw in the final half-hour.

Man of the match: Paul Pogba. The young Juventus midfielder scored France’s breakthrough goal with a crucial header. Earlier, his blistering volley was stopped by a stunning save from Nigeria keeper Vincent Enyeama.

Matter of fact: Nigeria captain Joseph Yobo, scorer of the own goal for France’s second, made his 100th appearance for his country.