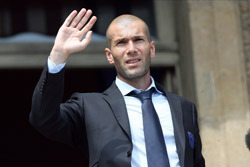 LA Galaxy general manager, Alexi Lalas, is hoping to tempt Zinedine Zidane out of retirement and team him up with David Beckham.

Lalas has made contact with the Frenchman’s representatives in the hope of bringing him to Major League Soccer.

Zidane retired from football following the 2006 World Cup, but Lalas is aiming to add the former France international midfielder to the Galaxy squad for the coming season.

“We have been in contact with his folks,” Lalas is quoted in The Times.

“Everything is very preliminary. If it happens, that would be wonderful – not just for the Galaxy, but also for our league.

“And I think he would really enjoy the opportunity, because he is competitive and he wants to win.

“He’s a great player and he doesn’t want to sit in the French countryside drinking wine.”

Lalas wants Beckham to play a part in bringing Zidane to Los Angeles, with the pair having played together at Real for three years.

“He knows him, and it’s amazing how very big deals get done on some guy saying ‘Hey, come on over and hang out’,” he added.