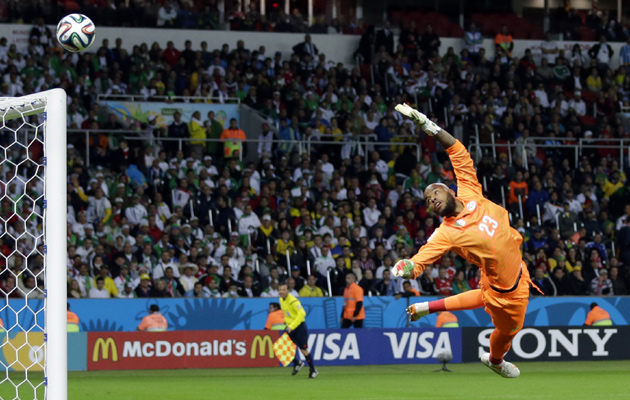 Match overview: Germany qualified for a quarter-final against France in Rio de Janeiro after scoring twice in extra time to defeat an Algeria side who had showed guts and determination to take the match beyond 90 minutes. Germany gave their weakest performance of the tournament and looked particularly vulnerable when captain Philipp Lahm moved from midfield to right-back to replace the injured Shkodran Mustafi.

Algeria were Africa’s sole remaining team in the competition and gave an early indicator of their ambitions when Manuel Neuer raced out of his penalty area to tackle Algerian forward Islam Slimani in the eighth minute. Ten minutes later Algeria had the ball in the German net, but El Arabi Soudani was marginally offside when he headed a cross past Neuer.

German made a half-time substitution, replacing Mario Gotze with Andre Schurrle, but it was not until extra time that they finally made the breakthrough, Schurrle cleverly turning in Thomas Muller’s cross. Mesut Ozil added a second in the penultimate minute of an enthralling game in which there was still time for Algeria o grab a consolation.

Key moment: Andre Schurrle’s goal for Germany in the second minute of extra time. After that, there appeared to be no way back for Algeria, although the north Africans battled right until the end and scored a consolation in the final moments of extra time.

Man of the match: Rais Mbolhi. Algeria’s keeper typified the energy and determination with which his side competed against opponents who had been clear favourites to reach the next round.

Matter of fact: Algeria’s goal, scored in extra-time injury time, was the 150th of the 2014 World Cup.

Talking point: Sometimes, goals don’t improve games. Up until 90 minutes, this was one of the most exciting 0-0 draws ever seen at a World Cup, a match full of drama and goalmouth action.