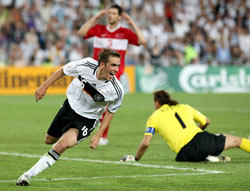 Germany have reached the final of Euro 2008 after they beat Turkey 3-2 on a dramatic evening in Basle.

Joachim’s Low’s side rode their luck against an injury-ravaged Turkey side, who can take immense pride in their efforts over the past three weeks.

Bastian Schweinsteiger, Miroslav Klose and Philip Lahm were on target for Germany while Ugur Boral and Semih Senturk replied for the Turks. However, the scoreline does not tell the whole story of a game, nor do justice to a depleted Turkey side that outplayed a strangely disjointed Germany side for large periods of an absorbing match.

Turkey were on top from the off against an uncharacteristically slipshod Germany. Kazim Kazim almost opened the scoring on 13 minutes after a good move down the right flank. The ball was laid back for Kazim Kazim whose right-foot shot cannoned off the bar.

Eight minutes later Turkey took the lead. The goal was symptomatic of the opening 20 minutes, with Turkey first to the ball while Germany were mere bystanders. Sabri was given acres of space on the right and his cross reached Kazim Kazim whose shot looped over Jens Lehmann and on to the bar before falling to Ugur Boral who forced the ball home via the legs of Lehmann.

It was the least Turkey deserved after a bright start to the game. It also provided a relatively novel experience for Fatih Terim’s side at this tournament of having to hold on to a lead. It was to be short-lived as Germany finally woke from their slumber and responded to the mini-crisis in style.

Lukas Podolski raced down the left and delivered a perfect cross for Bastian Schweinsteiger who lifted the ball over Rustu Recber with a deft flick of the outside of his right foot.

The equaliser came against the run of play and was scarcely merited, but if the Germany team assumed that it would presage a change in the pattern of play they were soon be shaken out of their complacency as Turkey continued to run the game.

Turkey’s Bayern Munich midfielder Hamit Altintop was bossing the central areas and the combination of Sabri and Kazim Kazim were proving to be a handful for the normally unflappable Philip Lahm.

After the break Turkey continued to enjoy the bulk of possession, in part due to the lamentable distribution by the German centre-backs Metzelder and Mertesacker. Frequently the pair lofted long aimless balls that were gratefully received by their Turkish counterparts. In contrast, Terim’s side played a patient, controlled game, frequently probing the weak spots of the vulnerable German defence.

However, despite Turkey’s superiority, the next significant moment of the game came at the other end when Lahm had a legitimate claim for a penalty turned down after he was brought down on the edge of the area. The referee waved play on, much to the annoyance of the German bench who’d risen en masse to demand a spot-kick.

The sense of injustice temporarily galvanised Germany and they began to press forward in numbers for the first time in the game. Hitzlsberger went close with a trademark long range effort, while Schweinsteiger and Podolski, who had been anonymous since combining for Germany’s opener, began to make inroads on the flanks.

The respite for the German defence was brief though, as Turkey once again began to dictate the pace of the game and were able to enjoy prolonged spells of possession in the German half.

With neither side possessing the necessary penetration to carve out any clear-cut chances, the prospect of extra-time loomed. However, a howler from Rustu changed the game. The veteran keeper came out to collect a hopeful cross from Lahm, but he misjudged its trajectory and the ball reached the predatory Miroslav Klose who headed into the empty net.

Trailing 2-1 with just seven minutes remaining was hardly unfamiliar territory for Turkey at these championships, and drawing heavily on their experience as the comeback kings of Euro 2008, they were soon back on level terms. The enterprising Sabri completely outfoxed Lahm on the touchline before crossing for Semih to beat Lehmann at the near post. It was a deserved equaliser for Terim’s side, who, unlike in their previous games, had been the more positive team throughout.

However, if there is one side that has historically shown their resilience and tenacity, it is of course Germany, and with one minute remaining they delivered the killer blow that finally sunk Turkish hopes.

Lahm, who had been given a torrid time on Germany’s left flank, redeemed himself in some style. Advancing on goal the full-back played a one-two with Hitzlsberger before lifting the ball over the onrushing Rustu.

This time there was to be no way back for Terim’s gallant side. Germany, as many people expected, had reached their goal, but no one could have foreseen the extraordinary manner in which it had been achieved.