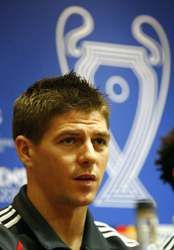 Bolton might be struggling in the league but at 1-1, from the 1st-leg, they’ve got every chance of making it into the Qtr-finals of the UEFA Cup. Click here for the latest match odds!

Steven Gerrard believes Liverpool’s recent record in Europe confirms their status as a great side.

Rafa Benitez’s team lifted the Champions League trophy in 2005 before reaching the final again in 2007, and Tuesday’s victory over Inter has taken them through to the last eight of this season’s competition.

Their impressive displays in Europe have been in stark contrast to their domestic form, where, under Benitez, they have not looked like mounting a serious challenge for the title.

But Gerrard believes the club has not received its due credit for their efforts in Europe in recent seasons.

“Our record in the Champions League speaks for itself, we don’t have to defend ourselves or say how good we are, I honestly believe our record says we are a great team in Europe,” said the Liverpool skipper.

“We are a force in Europe, we do not fear anyone. We have been there and we know what it is all about.

“I don’t want to say who we want to play but what I will say is we can let the rest worry about us, because we have the pedigree in this competition.

“People have said teams that are not great have won the Champions League but we can let our record answer that.

“We’ve been to the final twice in three years and won some big games in important stadiums – and produced the performances of a great European side.”

Looking ahead to Friday’s quarter-final draw, Gerrard believes Livepool are the team that everyone else wants to avoid.

He added: “We have the momentum, there is no doubt about that. And it could be important. We are playing very, very well now.

“We cannot get carried away because there are some monster teams left. But we are playing a lot better now, we are in the last eight and we know we have a great chance.

“We know what it’s like to get to the Champions League final. That’s why I’m sure the others will be worried about us.”

Bolton might be struggling in the league but at 1-1, from the 1st-leg, they’ve got every chance of making it into the Qtr-finals of the UEFA Cup. Click here for the latest match odds!