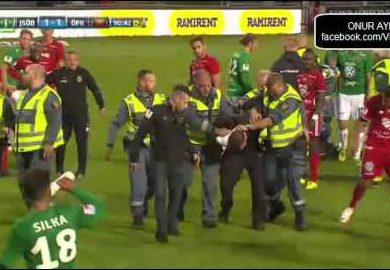 A Swedish match was abandoned on Monday after Ostersunds goalkeeper Aly Keita was attacked by a fan.

Ostersunds were drawing 1-1 in their Allsvenskan match against Jönköping Södra when the intruder ran on to the field and grabbed Keita, who fell to the ground.

Players and security tackled the man, who was escorted away.

Keita was given medical attention before being led off the pitch.

The 29-year-old later told reporters he had been struck in the temple, saying: “I am shocked and angry. It is awful that something like this could happen.”

Match delegate Nicklas Bengtsson said Keita was “not fit” to play on.

Police said a 17-year-old male had been arrested. They said he told investigators that he had left a bomb in the stands, but no explosive devices were found, Reuters reported.

“He is under arrest, we have informed the prosecutor of the arrest and interviews will be conducted with him about the suspected breaches of the law,” Jonkoping police commander Peter Nordengard added.

A statement from the Swedish FA said the match would not be restarted and that its disciplinary committee would decide if result should stand, or if away side Ostersund should be awarded a 3-0 victory.

This was the second time a game in the Swedish top flight had been abandoned this year.

In April, Gothenburg’s match against Malmo was halted <when a firework exploded at the feet of a substitute who was warming up.