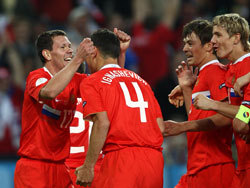 The holders Greece are out of Euro 2008 after they went down to a 1-0 defeat to Russia in Salzburg.

A second successive defeat ended the title defence of Otto Rehhagel’s side, but they can have few complaints about their exit, after they were outplayed by a vibrant Russia side.

From the outset Russia looked the better side with their movement and slick passing causing endless problems for the Greeks. The first opening fell to Roman Pavlyuchenko, who drew a fine save from Antonis Nikopolidis with a curling right-foot shot that the Greek keeper did well to tip over the bar.

However, somewhat against the run of play, the best opportunity in the early exchanges fell to Greece. Inevitably, it came from a set-piece when Basinas swung over a free-kick on to the head of Angelos Charisteas, but the forward missed the ball completely and Igor Semshov was able to scramble the ball away for a corner.

However, as the half progressed, it was Russia who were in the ascendancy, and it came as no great surprise when they went ahead on 33 minutes. Dmitry Torbinsky chipped a cross to the far post and Nikopolidis sprinted out of his goal to retrieve the ball, but Russian skipper Sergei Semak cleverly flicked the ball over his head and Konstatin Zyryanov tapped into the empty net. It was a moment of madness by the Greek keeper and would prove to be a costly mistake.

The second half began in pulsating fashion with Russia continuing where they left off, while Greece, aware that their crown was on the line, finally emerged from their defensive shell.

Immediately after the restart, Charisteas, the hero four years ago, was gifted a wonderful chance seven yards out but he shot feebly at Igor Akinfeyev.

At the other end, Pavlyuchenko broke free down the left but dragged his shot wide of the near post. The Russian striker had two more good chances but on both occasions he was denied by Nikopolidis. Pavlyuchenko then teed up Diniyar Bilyaletdinov and the midfielder shot just wide. Indeed, were it not for the profigacy of the Russian strike force and Pavlyuchenko in particular, Guus Hiddink’s side would have been out sight by the hour mark.

With the score at 1-0 Greece were still in with a chance of snatching something from the game. With seven minutes remaining it looked like they had got out of jail when Gekas raced on to a flicked header and after his shot was saved, the ball fell to Angelos Charisteas who tapped in the rebound. To the dismay of the Greek players the linesman had already raised his flag for offside.

It was to be Greece’s last chance, as Russia, who had ample opportunity to extend their lead in the last ten minutes, successfully closed the game down.

They now face Sweden on Wednesday, aware that a win will see them through to a quarter-final confrontation with Holland, and for Hiddink, the chance to face his homeland.