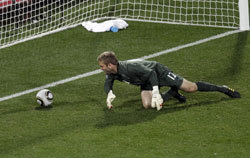 A terrible blunder by Robert Green cost England two points in their World Cup opener, as they were forced to settle for a 1-1 draw with the USA.

Steven Gerrard gave England the best possible start, latching on to Emile Heskey’s pass to put England ahead after just three minutes, but Green’s failure to deal with a tame, long range effort from Clint Dempsey gave the United States a share of the spoils.

The draw was not the result England coach Fabio Capello was hoping for but he will have been reassured by the commitment levels of his side as they pressed until the final whistle in search of a winner.

England were quick out of the blocks and captain Gerrard handed them the perfect start when he burst onto a pass from Emile Heskey and steered the ball past the advancing Tim Howard.

America’s biggest threat in the early stages came from set-pieces, with Milan’s towering centre-half Oguchi Onyewu going close with headers on a couple of occasions.

Their best chance fell to Jozy Altidore, who perhaps should have done better when he glanced a Donovan cross wide of the post from just six yards.

James Milner, who had been suffering from a stomach bug in the days leading up to the game, was withdrawn on the half hour mark and replaced by Shaun Wright-Phillips. The winger’s introduction appeared to galvanise England and they began to exert some control of the match as the half progressed.

They were, however, forced to enter the interval level after a terrible mistake from Green.

Dempsey stroked a weak shot goalwards, and there appeared little threat until Green fumbled the shot and looked on aghast as it rolled under his body into the net. The United States could scarcely believe their luck, while England looked shell-shocked for the remainder of the half.

After the interval there appeared greater resolve from Capello’s men, and they produced a series of swift attacks that had the US scrambling desperately at times to clear their lines. Johnson and Lennon were combining well down the right, while Frank Lampard began to ghost in to the attacking areas he flourishes in at club level, forcing a smart save from Howard just after the hour mark.

The best chance in this spell fell to Heskey who was put through on goal by a precise pass from Lennon, but the Aston Villa striker fired straight at Howard from the edge of the penalty area.

The USA were offering little as an attacking threat but a rare incursion into England territory almost gave them an unlikely lead. Carragher, who came on at the interval for Ledley King, was outstripped by Altidore and could only watch as Green redeemed himself with a fantastic fingertip save to push the ball onto the post.

As the game wore on, England, with Rooney finally beginning to enjoy some space, continued to press in search of the winner, but a combination of sloppy finishing and some determined defending, ensured that the honours remained even.

At this stage, both teams will be relieved to have avoided defeat, but given the balance of play, it was Bob Bradley’s United States’ side who looked much the happier at the final whistle.