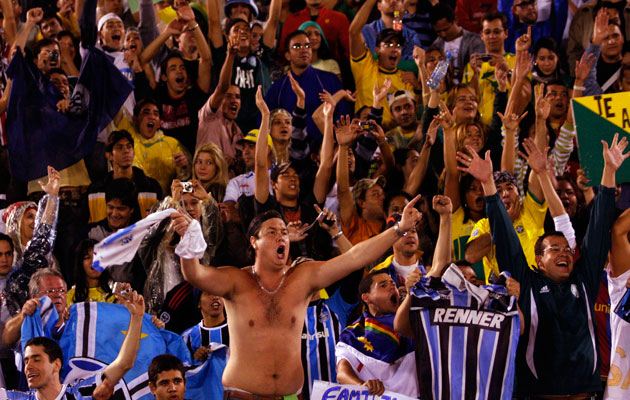 FIFA President Sepp Blatter yesterday praised a decision to ban a club from the Brazilian Cup after its fans racially abused an opposition player.

Blatter’s comments came as Brazilian authorities continued to question some of the fans reported to be involved in the incident.

“I’ve said football MUST be stronger in tackling racism,” Blatter said on Twitter. “Brazil has sent the right message, banning a team from the Cup due to ‘fans’ abuse.”

Wednesday’s ruling came after a small group of Gremio fans called Santos goalkeeper Aranha a “monkey” and were caught on camera (see above) making monkey noises toward the player.

Brazil’s sports tribunal voted unanimously to exclude Gremio from the Brazilian Cup. The tribunal also fined the team more than $20,000 and said fans identified as responsible for the insults will be banned from attending matches for two years.

“This is a landmark ruling,” said the commission head, Fabricio Dazzi.

“I don’t think racial abuse incidents like that will happen again. The fans will think twice, knowing that their club can be punished for their acts.”

The referee and linesmen officiating at the match were punished by the court for failing to report the incident.

Gremio said they were being punished for the actions of a small minority of fans, and would appeal against the decision.

“I believe the decision was too harsh. Gremio has done everything it could to identify the guilty fans,” said Gremio president Fabio Koff.

A young woman caught by cameras yelling “monkey” from the stands was interviewed by police yesterday and claimed she didn’t intend to insult Aranha. According to Cleber Ferreira, the police investigator in charge of the case, the woman said she was just chanting the word randomly.

After being identified through social media networks, the woman reportedly was suspended from her job and had to leave the city with her family.

Racism is a crime in Brazil and the fans found guilty could face up to three years in prison.