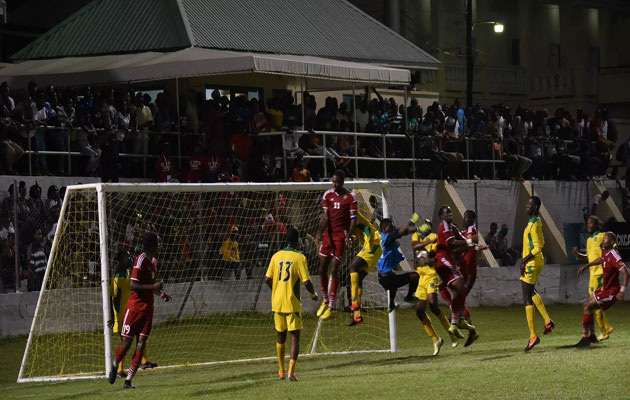 Not so long ago, Guyana’s footballers were national heroes. Now, quite literally, the Golden Jaguars are zeroes, having crashed out of the 2014 Caribbean Cup qualifiers without scoring a single goal. And this from a team who had eliminated 2006 World Cup finalists Trinidad & Tobago on their way to the semi-final stage of the CONCACAF’s qualifying section for Brazil 2014.

Strengthened by an influx of overseas-based players, the Jaguars even managed to make it into the FIFA rankings top 100. Now they are no longer in the top 150 and most of those imported players are no longer welcome, with the Guyanese game perhaps at its lowest-ever ebb.

Before the Caribbean Cup qualifiers, Guyana had not played a senior game since November 2012. After coach Jamaal Shabazz left, no replacement was found until Denzil Thompson was appointed shortly before an inexperienced squad flew to St Kitts & Nevis last month.

Shabazz had drafted in overseas players such as the Cort brothers, Carl and Leon, who have both played in the English Premier League, and Guyanese-qualified players plying their trade professionally in the USA, including Chris Nurse and JP Rodrigues. But all these were excluded after Guyana Football Federation (GFF) president Christopher Matthias went on live television to defend the team’s slide down the rankings.

“Advancement is not necessarily development,” he said on NCN’s weekly magazine show. Matthias claimed he was trying to stem federation debts estimated locally to be around £200,000 due to expenses from the World Cup campaign – such as staging an altitude-training camp in Colombia and flying in foreign-based players.

Matthias also claimed Faizal Khan, an agent licensed in England but of Guyanese extraction, had benefited from importing the overseas-based players. Khan vehemently denied it but was unable to go on television to respond due to a family illness in England. Instead, Shabazz defended his own legacy, fuming: “No football has been played. The name of this sport is football not administration.”

Khan has challenged Matthias to prove his allegations and NCN has distanced itself from the claims.

Matthias’ bar on overseas players ran directly against the Caribbean Football Union’s attempts to attract more of them by scheduling qualifiers in the international break for the first time. Walter Moore, of Kazakhstan’s Vostok, was called up but the rest were inexperienced locals. No players from champions Alpha United, who played in the recent CONCACAF Champions League, were selected.

The Golden Jaguars’ only point in the qualifiers came in a 0-0 draw with Dominica, whose population is a 10th of Guyana’s 735,000. Other games against St Lucia and St Kitts & Nevis were both lost 2-0. Rodrigues and Cort, both at Tampa Bay, and Fort Lauderdale’s Nurse were all ignored. Rodrigues says: “I have immediate family still living in Guyana and my father was raised in Georgetown. I grew up in America but was raised under the Guyanese culture. I cannot live in Guyana and be a professional footballer. I make a living playing football full time.”

Other former players, including Kayode McKinnon and Charles Pollard. have also voiced their frustration. After Matthias’ NCN interview, Nurse sent the GFF president an emotional letter but received no reply. In the wake of Guyana’s poor showing, Nurse posted the contents on Facebook. “I would love for you [Matthias] to stand in front of my father and my grandfather and tell them that I am not Guyanese enough to represent the national team,” he wrote.

FIFA monitored a GFF meeting on August 9 when delegates bid to propose a motion of no confidence in Matthias. “We are analysing our observers’ report” said a FIFA spokesman. “We can’t speculate on potential future scenarios.”