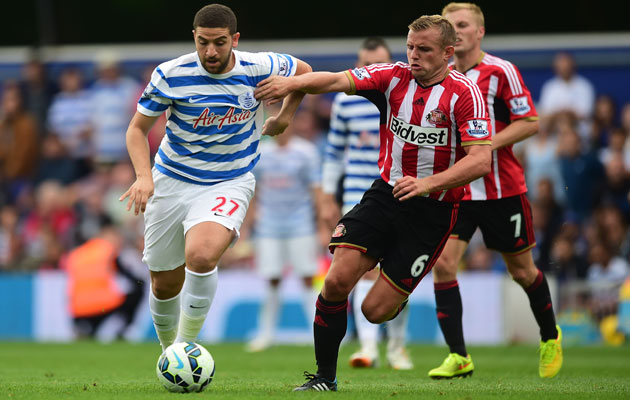 QPR manager Harry Redknapp has dismissed claims made by out-of-favour midfielder Adel Taarabt that he was fit to play, by suggesting that the midfielder’s recent weight loss is due to a bout of tonsillitis.

Redknapp lambasted the 25-year-old following QPR’s 3-2 defeat to Liverpool on Sunday, claiming he cannot “protect people who are about three stone overweight.”

Taarabt denied he was unfit and went on to blame Rangers’ poor start to the season on Redknapp’s failings as a coach.

“The only reason he has lost weight is because he has had tonsillitis,” Redknapp said. “That’s the only way we could get any weight off of him.

“He is not fit to play a game, that’s the truth. He is the worst professional I have ever come across and I have been his only ally at QPR for the past three years. He doesn’t try and I have protected him for too long.”

Taarabt shows off his svelte physique

The manager claims the player had displayed an appalling attitude the last time QPR had been in the top flight.

“When we were last in the Premier League we played Manchester United at home on a Saturday lunchtime,” Redknapp said. “I had a phone call telling me Adel had been in a casino until 5 a.m. that morning.

“I pulled him into my office and asked whether it was true. He told me that he hadn’t been in a casino until 5 a.m. on Friday morning but that he might have been there on Thursday morning.

“After we had been relegated last year we went to Exeter to prepare for a season in the Championship. I had to leave to go and have an operation on my knee.

“Steve McClaren was working with me at the time. As soon as I left he sent Adel home because he wasn’t up to it. The fitness coaches at QPR, everybody tells me he doesn’t try.

“He doesn’t want to run around. I have tried to protect him until now but the fans have to know what’s going on. Even I could suck my stomach in for a picture and look OK.”

Somewhat surprisingly, given recent hostilities, Redknapp insists the player has a future at Loftus Road if he changes his attitude.

“If something comes off this and it sparks some life into him then great,” he said. “I would love him to prove me wrong then at least we’d be getting something for our money.”

Redknapp also dismissed Taarabt’s claims he only watches “five or 10 minutes of training sessions”, stating: “I am the first one in that training ground every day at 7 a.m. and I am always out on the training field.”